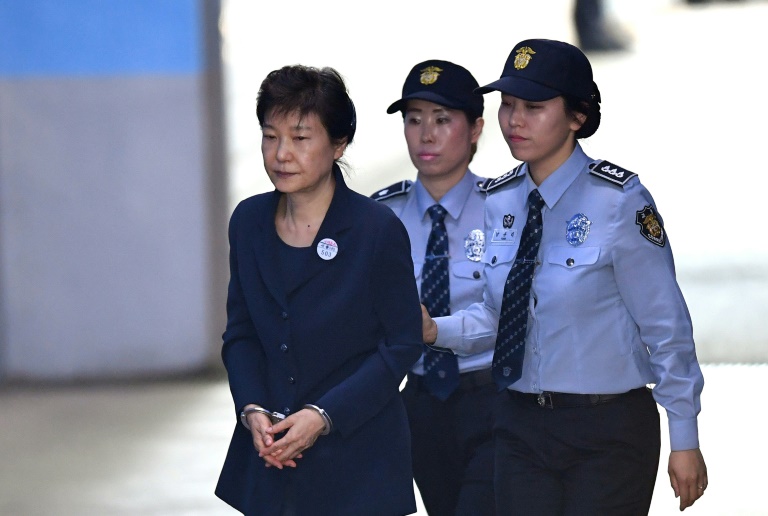 North Korea threatened on Wednesday to impose the death penalty on the South’s former president Park Geun-Hye over an alleged plot to assassinate its leader Kim Jong-Un.

“We declare at home and abroad that we will impose death penalty on traitor Park Geun Hye,” it said.

The former director of South Korea’s National Intelligence Service (NIS) Lee Byung-Ho would meet a similar fate, it added, along with “their groups”.

They “can never make any appeal even though they meet miserable dog’s death any time, at any place and by whatever methods from this moment”.

Both Malaysia and South Korea have blamed the North for the assassination, which retorts that the accusations are an attempt to smear it.

Last month Pyongyang’s powerful ministry of state security said it had foiled a plot by the US and South Korean spy agencies to kill Kim using a biochemical weapon.

The lurid accusations came amid continuing high tensions over the North’s nuclear and missile programmes and with Washington considering whether to re-designate Pyongyang as a state sponsor of terrorism.

Park is currently in custody and on trial in Seoul on charges of bribery and abuse of power related to the sprawling corruption scandal that saw her impeached.

Wednesday’s statement from Pyongyang demanded that Seoul hand her over along with the other accused “without delay” as “organisers of the hideous international terrorist crimes”.

The demand came with Park’s successor, new South Korean President Moon Jae-In – who backs engagement with the North – on his way to Washington for a summit meeting with Donald Trump.

In a statement, the South’s National Intelligence Service said: “As we have repeatedly clarified, the North’s allegations are groundless.”

It added: “It is intolerable that the North openly threatens the lives of our people.”

When Pyongyang announced in May it had uncovered the alleged plot it said the CIA and NIS had suborned, bribed and blackmailed a North Korean citizen which it identified only as Kim to carry out the attack.

Possible locations included the mausoleum where Kim Jong-Un’s father and grandfather — the North’s founder — lie in state, or a military parade.

“The villains even thought about disguising the operation as car or train accident,” it added Wednesday.

Any such operation would be extremely difficult to prepare and carry out successfully. The North’s leader is surrounded by tight security at all times, and Pyongyang maintains a gigantic surveillance system over its own population that is ingrained at every level of society, where open dissent is unknown.

In May, analysts said the accusations could be a pre-emptive attempt to try to dissuade Washington from any attempt at a surgical strike on its leadership, as suggested by some commentators.

Leader Kim was “a symbol of the dignity and might of the DPRK and it represents the life and destiny of the army and people of the DPRK”, Wednesday’s statement said, using the acronym for North’s official name.

Its army and people were determined to “ferret out” those who would harm the supreme leadership “wherever they might be on the earth”, it added, “and mercilessly cut their dirty bodies to pieces”.

Experts had warned Park that “regime change will be difficult” in the North, it claimed, but she had examined and “directly signed” the alleged NIS “secret operational plan”.

The United Nations and rights groups accuse the North of widespread abuses, including an absence of fair trials.

Pyongyang has a history of overseas killings. As well as the Kim Jong-Nam murder, 21 people including four South Korean government ministers were killed in a bombing in the Myanmar capital Yangon in 1983 targeting Seoul’s then president Chun Doo-Hwan.

North Korean commandos also infiltrated Seoul in January 1968 in a failed attempt to assassinate its then leader Park Chung-Hee. Bullet holes are still visible on a tree above the presidential Blue House.