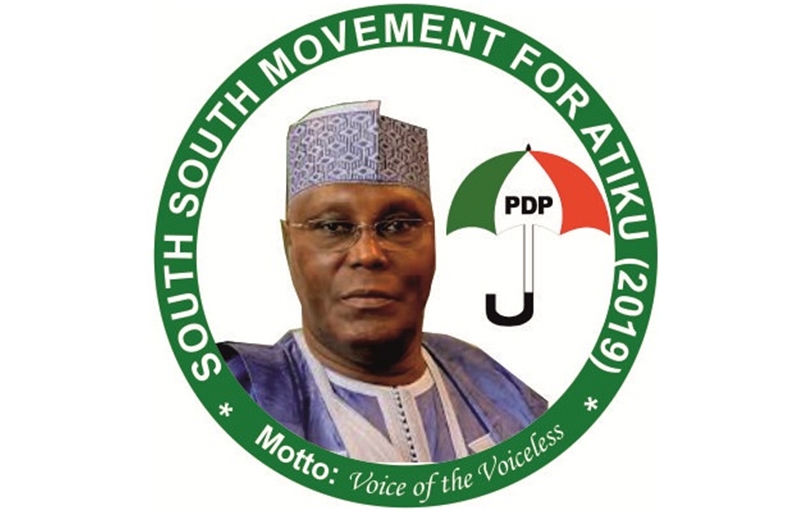 Following the official declaration of former Vice President, Alhaji Atiiku Abubakar to vie for the position of the President of Nigeria in the forth coming general elections, South South Movement for Atiku (SSM4A), a support group for the actualization of the Atiku’s ambition has called on Nigerians to key into the vision and aspiration of Alhaji Atiku Abubakar in clinching the number one seat of the Country come 2019.

The group made this clarion call through its National Coordinator, Chief Barr Benjamin Ejiro Nomuoja who in an exclusive interview in Asaba, gave three reasons why all eligible voters in Nigeria especially those in the Southern Region of the country should rally behind Atiku, emphasizing that Atiku Abubakar has a pedigree that no other northerner or opposition candidate can exhibit.

Barr. Ejiro noted that, Atiku’s positive thought towards the burning issue of Restructuring, a very successful business man and especially, with his position as a detribalized Nigerian, makes him a true bride in the presidential race for the 2019 general elections having come to Rivers State to launch his ambition to the world.

In his words; “One of the core reasons why our movement have decided to pick interest towards the support for Atiku to be President, is the issue of true fiscal federalism. For we in the South South region of Nigeria, this is one of the areas we earnestly yearn for. Our group is also associated with the Federalist movement of Nigeria, which is also a core group that are yearning and advocating for true fiscal federalism to be imbibed as a way of solving the regional issues we have in Nigeria. The essence of true fiscal federalism is that, it gives each region the power to have control over their resources. This will promote a form of competition and Atiku is the first Northerner that has come out to show support for restructuring which is one of the areas that is highly discussed in Nigeria at the moment.

“Everybody is now talking about restructuring. APC as the ruling party today, they have it in their manifesto that once they come into power, they will restructure Nigeria. It is there in their manifesto but as at today, nothing has been done in-spite of their campaign promises. Our support for Atiku is partly based on that and that is why I am telling citizens of all South South States that under an Atiku presidency, the South South will not be cut off, will not be short changed and would be carried along. Under the promises of restructuring, we will be made managers of our resources not just for the South South States but all the States in the Niger Delta of which the South South states happen to be the core states. The issue of State Police and so many other issues that most of us have been yearning for, will be a reality under an Atiku presidency.”

While stressing on the second reason for SSM4A support for Atiku, Barr Ejiro said, when most of his supporters call him, questioning him on the reasons for his mission, he simply tells them that, Atiku is the true definition of a detribalized Nigerian. “When my supporters call me to ask why Atiku? Atiku is like any other politician that will come on board and preach same mission for true fiscal federalism, why bringing people from the South South states to come and support him, why do you think Atiku will be the person that will bring that to pass, Muhammadu Buhari said the same thing in his APC manifesto and nothing has been done? Why do you think another Northerner will ensure that restructuring will be part of his manifesto and ensure that he does it? My answer is that, Atiku is a detribalized northerner and Nigerian that has actually pitched his tent in most states of the federation. His marital choice of wives from Igbo and Yoruba, alone gives a sense of hope that he is a detribalized man.”

Continuing, Barr. Ejiro added that, “Our joy is that, he has come to Rivers state, one of our core states and my coordinator from Rivers, Mr Ikem Oputa was on ground to ensure that Atiku coming to Rivers was a landmark achievement because he has taken Rivers State as an area of interest where he brought out his interest to contest. And the fact that he is a detribalized northerner is one aspect that everyone in the South South should hold on to. He is a northerner, he has a pedigree that no other northerner can exhibit and it is time for us to work with a Northerner that will give us piece of hope. We from South South are very happy and willing to go any length to ensure that he becomes the President.”

Rating Atiku as a very successful business man, Barr. Ejiro stressed that, taking a look at what Atiku is doing with Chicken Cottage Restaurant, which he intends to open in all 36 States of the country, shows Atiku as a core business man and a vast employer of labour. “The idea why Atiku is doing this, is because as a business man, he knows that one of the ways to win the war on unemployment is through massive job creation. The problem we have in Nigeria now is youth unemployment, we have shortage of industries and as an entrepreneur which he is, he has set the ball on motion by trying to open businesses that will ensure that employments get to a large majority of the average youths in the country.”

“His major concern is on Youth Development. He is very active on social media and that is one way to get to know the yearnings of the Nigerian youths. Almost all the youths nowadays are now on various social media and for Atiku to be on those platforms, tells you that he is willing to reach out to Nigerian youths in whatever manner in order to be able to create solutions for their needs.” Ejiro submitted.

The Coordinator further called on the People’s Democratic Party (PDP) and Nigerians to give Alhaji Atiku Abubakar a chance because he has been a Vice President and has the experience, pleading that whatever misconception Nigerians have about Atiku, should be buried.

“We are telling PDP now that, whatever the grievances in the party, Atiku as a detribalized northerner and a man with a great pedigree, will ensure that PDP clinches power in 2019. He is the most viable candidate that we can picture to come under the PDP banner even if there are other candidates. He is one of the candidates that will turn the tables around against an APC candidate that is not politically stable, against an APC government that has promised restructuring and failed to deliver. They should not look at Atiku as a money bag. They should look at his credentials and not look him as somebody that has money and they feel, let’s go all out and get what we can from Atiku. They should look at his areas of excellence and use that to judge his performance. We are saying that in the midst of all things, since the PDP has zoned its presidential slot to the North, we need a candidate that will be detribalized, who is not a fundamentalist or an extremist but somebody that we know that at the end of the day will carry everybody along and that is what PDP stands for. So I urge all the delegates in PDP to come out enmasse and root for Atiku to be our flag bearer.”

While expressing disappointment at the foul play of the APC in robbing the former Vice President of his presidential ambition at the party’s primaries in 2015, Ejiro reassured his groups’ selfless mission to see to the realization of an Atiku’s Presidency, saying “Atiku is the real deal”.

“It is a pity that our support for him did not come to reality in 2015 when he contested under the banner of the APC, but we are assuring Atiku now that we are willing to go and deliver the Six South South states for him. We have started our network on a grassroot level, all our coordinators are well grounded in grassroots politics, our door to door campaigns, village to village awareness have already been put in place and so many strategies that we intend to bring on board. As a movement, we are doing this battle not based on financial benefits but based on the fact that, Atiku is detribalized, he is a northerner that we can trust to keep the unity of Nigeria in place. If no other region will deliver Atiku, I the coordinator of South South Movement for Atiku is assuring him that the Six South South states will definitely deliver him against an APC candidate come 2019.