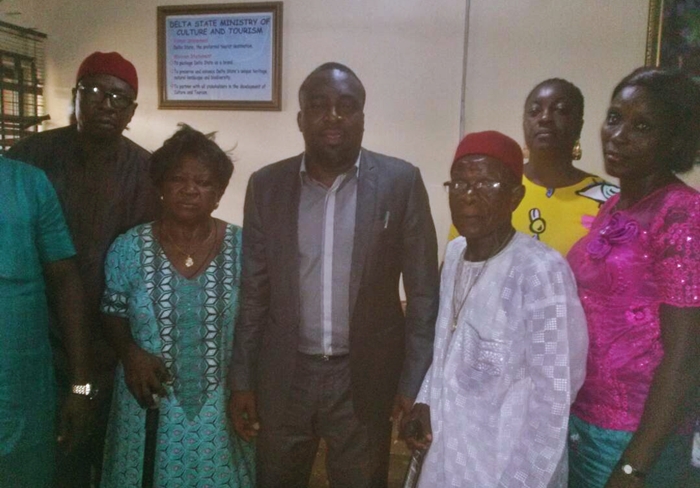 The State Commissioner, Directorate of Culture and Tourism, Mr Emmanuel Chinye has called on members of the People’s Democratic Party in Onicha Olona Ward Four to remain steadfast and work for the re election of Governor Ifeanyi Okowa and  the party’s victory in the forthcoming 2019 general election .

Mr Chinye stated this when he received the executive members and some elders and leaders of PDP Ward Four, Onicha Olona in his office during a courtesy visit.

He said Onicha Olona Ward Four had remained a stronghold of the People’s Democratic Party in Aniocha North Local Government Area since the inception of the party stressing that the people would always prove their strength through the ballot box.

The Commissioner noted that Governor Ifeanyi Okowa had performed well in piloting the affairs of the State with clear infrastructural development across the entire state hence the need to support and work for his re election in 2019.

Mr Chinye maintained that the governor’s developmental strides were worthy of note as no local government area  had been left out in terms of practical development in line with his SMART agenda.

While urging them to support and key into the policies and programmes of government,the Culture and Tourism Commissioner said Governor Okowa had redefined governance with the town hall meetings across the twenty five local government areas where he meets and interface with Deltans directly.

Mr Chinye assured that as Commissioner, Directorate of Culture and Tourism he would do his best to promote, preserve and enhance the culture and tourism potentials of the State.

The Leaders and elders of PDP Ward four, Onicha Olona who spoke through Mr Austin Modugwe said the visit was to felicitate with the commissioner on his appointment by Governor Ifeanyi Okowa as a member of the State Executive Council.

He thanked Governor Okowa for appointing Mr Emmanuel Chinye as a Commissioner saying that it was a big plus to the ward and local government area stressing that they would continue to support the governor and the party as they had always done.

Mr Modugwe urged the management and staff of the Directorate of Culture and Tourism to support the Commissioner to enable him succeed.

Prayers were later offered for the Commissioner by the eldest man and PDP leader in the ward,Chief Augustine Ojei where he also assured that the people were fully in support of the re election of Governor Okowa.

South South Group Give Reasons Why Atiku Should be Nigeria’s President
Delta 2019: Group Endorse Uduaghan And Ogwah For Senate And Delta Assembly