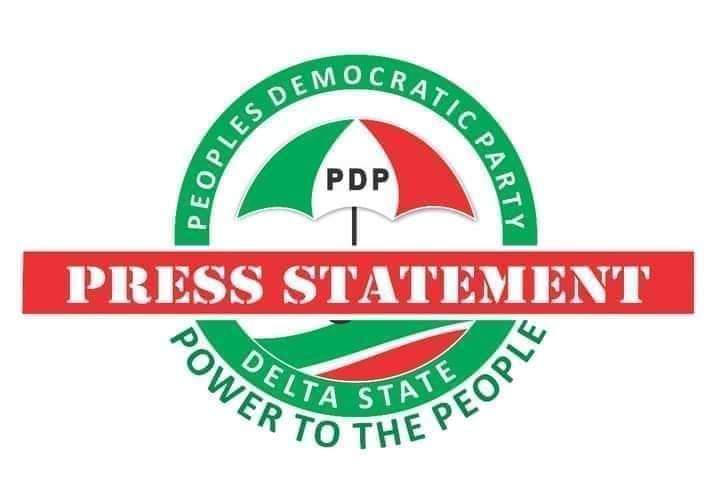 Delta State PDP has challenged the opposition APC in the State to stop displaying crass ignorance and idiocy over the present Contributory Pension Scheme processes and get its facts right, instead of playing to the gallery and misleading Deltans over the issue of retirees in the State.

State Publicity Secretary of Delta PDP, Dr. Ifeanyi Osuoza, in a statement, urged the APC to display some dignity and always get its facts right, before jumping into the public space with its puerile, half baked populist posturing, by acknowledging the commendable and visible steps of the Governor Okowa administration and indeed successive ruling PDP governments in the State, to address the pension matter and ensure that no stone is left unturned in the effort to get all pensioners, who have not already been enrolled in the Contributory Pension Scheme, are properly captured biometrically as soon as possible and given their rightful dues, which they have earned, in their years of meritorious service to the State.

Dr. Osuoza’s response to APC’s statement titled: “Delta APC deplores condition of retirees, urges them to vote out PDP in 2023, reads: “We are once again constrained to challenge the exhibition of falsehood and bad manners displayed by the APC megaphones and their sponsors to ignorantly attack the excellent efforts of PDP administrations over the years to put the matter of civil servants and pensioners on the front burner, starting with our affable leader, His Excellency, Chief James Onanefe Ibori who, with sheer adroitness, laid the transformation foundation on which his successors have built upon to make Delta a State that cannot be ignored.

It is an acknowledged, incontrovertible fact across the length and breadth of Delta State that under the Chief James Ibori administration, civil servants had their lives transformed completely, with many who never thought they could ever own houses and drive cars, actually bought cars of their own and became landlords.

“Pension was paid to pensioners as a matter of priority, including those inherited from the defunct Bendel State and those who retired in Delta State.

His successor, Dr. Emmanuel Ewetan Uduaghan made an impressionable impact with his three-point agenda with human capital development as one of the administration’s priorities, which he diligently implemented and achieved a huge success. He improved on the package of achievements made by Chief Ibori, with retirees getting paid, until the Contributory Pension Scheme (CPS) was established under the Pension Reform Act of 2004, which required sincere, painstaking administrative, bureaucratic compliance to get old and emerging retirees to get enrolled, in order to checkmate fraudulent and other sharp practices until that too was repealed and replaced with the Pension Reform Act in 2014.

The administration of the peoples’ Governor, Senator, Dr. Ifeanyi Okowa inherited the new Pension Reform Act of 2014, on taking over the mantle of leadership, in 2015.

It is pertinent at this juncture, to educate the ignorant APC and correct its wild comments and reckless, dangerous misunderstanding of the pension modalities, that the new pension reforms act of 2014, mandates a minimum contribution of 10 and eight percent of employees monthly emolument by the employer and employee respectively. This is paid into the employee’s Retirement Savings Account (RSA).

It was also mandatory that the new pension reforms would be actualized through the Biometric capture of those eligible to be enrolled and this new directive was challenging especially against the backdrop of an inherited pension regime that was operated manually, under the old Defined Benefits Scheme (DBS).

The above scenario was what the administration of Governor Ifeanyi Okowa inherited when he assumed the mantle of leadership in 2015 and even the NLC and pensioners themselves have acknowledged that the administration has done a fantastic job so far in ensuring that the civil service, which operated in the analogue mode for so many years is fully digitalized and biometrically compliant and it is an ongoing process since the civil service churns out retirees and pensioners every year, even as those already employed and new employees are also being enrolled, captured and updated biometrically.

Of course, we want to assume that the ignorant, half baked APC publicists and megaphones actually know what ‘Biometric’ means, and for the avoidance of doubt and appropriate education on how the new pension reforms act is operated, we refer the dumb and daft APC publicists to the document: “Pension Commission PENCOM: FREQUENTLY ASKED QUESTIONS, May 2020, revised edition.”

Indeed, according to a report on the implementation of the scheme published by PENCOM: “As at Q4 2020, twenty-five (25) States of the Federation (including Delta) had enacted pension laws on the CPS while seven (7) States were at the bill stage”.

For the avoidance of doubt, let us also inform the ignorant APC that Governor Ifeanyi Okowa has taken the matter of retirees a notch higher, by reducing the State’s indebtedness on the Contributory Pension Scheme, CPS of over =N=181billion to =N=50billion, thereby saving the State =N=95billion after review of the outstanding obligations.

This reduction was achieved by the astute, pragmatic approach of the Governor Okowa administration, which collaborated with the Workers Unions in joint reconciliation exercises with organised labour and pension consultants.

An impeccable report from officials of the State government’s economic team has confirmed that the State government discovered that the faulty debt profile arose from the State’s transition from the old pension scheme to the Contributory Pension Scheme (CPS) using the =N=18,000 minimum wage benchmark because wrong parameters were used in the computation.

According to the report: “In computing pension, we use the date of entry, birth, and net pay. The earlier computation wrongly assumed that people retire at 45, instead of 60 years. So, it was building on pension, even while employees earn salaries. That amounted to double-counting, which was wrong.

“We inherited =N=181B as pension liabilities. We did a review with labour and it saved the State =N=95B. Less than =N=80B was left after reconciling with labour. It was also an error to have projected salary increase in the computation.”

Even the Chairman, Delta State Council of NLC, Comrade Goodluck Ofobruku, who served in the committee, has expressed Labour’s satisfaction with the outcome of the review, saying that the Labour Unions also convinced the government to review the percentage of accrued pension paid to retired workers.

“The State’s Contributory Pension Law provided that when an employee retires, he should be paid at least 50 percent of his last salary scale, but when the =N=7,500 minimum wage was being used, workers received between 15 and 30 percent of their last salaries. So, the government approved its implementation.

“This means that instead of the =N=7,500 minimum wage used to calculate their entitlement, the government approved =N=18, 000 minimum wage for those who retired in 2011. Governor Okowa approved the difference, which labour had been clamouring for.

“Also, difficult as the Contributory Pension Scheme is, Governor Okowa has shown sustained commitment by releasing =N=1.3 billion monthly in servicing pension obligations to State government’s retirees. Delta is one of the very few States that have continued to run the contributory pension scheme’, Comrade Ofobruku confirmed.

“Of course, it has become pertinent to inform the clueless APC alarmists that of the 25 States that have fully enacted the laws of the Contributory Pension Scheme, only eight States, including Delta, are truly running the contributory pension scheme as it should be operated, because it is expensive for the government to run, especially with the approval and regular payment of the new minimum wage, which Delta State has fully implemented, even despite the devastating Covid-19 pandemic, which many States have used as an excuse not to even pay salaries at all.

It is also important to expose the naivety of the APC’s fake publicists by pointing their attention to the acclaim Governor Okowa received from pensioners when the retirees commended him for his continued effort in improving the payment of pensions and clearing the backlog of unpaid entitlements.

The late Chairman, Delta State Bureau of State Pension (DBSP), Mr. Tony Obuh, announced how Governor Okowa has left no one in doubt of his determination and sincerity in dealing with the issues bordering on the State’s pensioners since the commencement of his administration.

Obuh said: “Early in the life of Okowa’s administration when the revenue dropped drastically, he managed to sustain a monthly release of =N=150 million for pension payments with the promise to increase it with improved resources. Later, the governor increased the monthly releases to =N=300 million and then =N=500 million. So, the backlog of unpaid pensions has reduced.”

Is this the Governor Okowa and his PDP predecessors that APC’s infantile propagandists want to smear with their fake posturing and allow themselves to be used as a willing tool in a sponsored advert message to achieve mischief?

Indeed, Deltans can see and read between the lines and decipher fake from reality. There is no contention with the fact that APC is fake in Delta; it is a party that is populated by people who do not even understand what governance is and is even intellectually lazy as an opposition party, to do proper research about what is happening around them and get the facts, before rushing to the public space with wild allegations. Is it with this kind of ignorance that they plan to govern Delta State?

The APC has no presence anywhere; it can only revel in idiocy and bellyache in futility, even as PDP continues to consolidate its hold on Delta, enjoying the goodwill and synergy which the party has built with the people who have acknowledged that Delta State is a PDP State.

It is against this background that we are commending the people of Delta State for believing in Governor Ifeanyi Okowa, our own Ekwueme, and giving him and the PDP their unflinching support as we collectively join hands together to build a Stronger Delta for all Deltans.