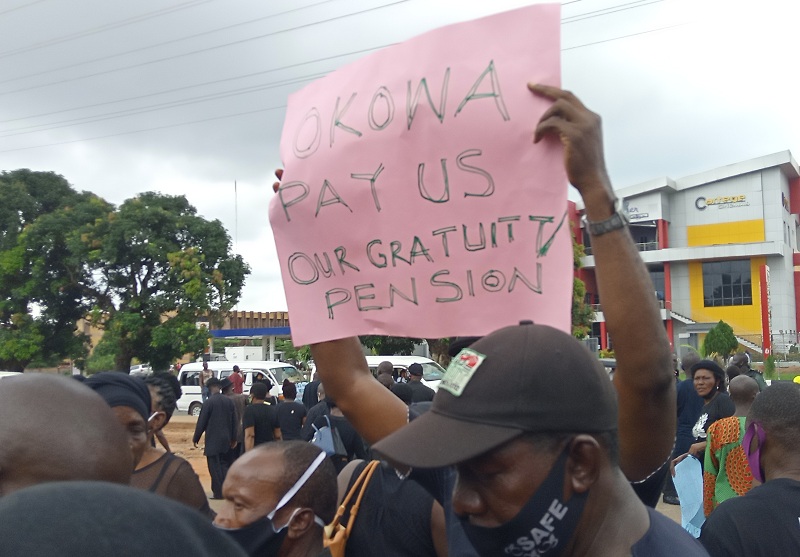 Following the felicitation message to a former Governor of Delta State, Chief James Ibori on his 63rd Birthday by retirees in the state where they also appealed to him to prevail on Governor Okowa over their unpaid pensions and gratuities, the opposition party in the state, All Progressives Congress, APC has urged Deltans to put an end to PDP’s reign come 2023.

Riding on the demands of the senior citizens, Delta APC blamed the insensitivity of the Governor Okowa led administration to plight of the retirees who have sacrificed 35 years of their lives in serving the state and are yet to be compensated nearly Seven years of exiting active service.

The retirees who had particularly expressed gratitude to Chief James Ibori who they described as a Vector of Joy to the down trodden while he was governor of Delta State, said, “We know that you raised men from grass to grace and gave hope to very many who were in despair. In spite of the odds, you remain a force of joy and happiness to the hopeless and frustrated and we are confident that even at 63, your verve in that wise has not dimmed.”

Imploring Ibori’s intervention, Comrade Augustine Mode on behalf of over 5000 retirees of the Delta State Local Government Service Commission and Public Primary Schools Teachers, said, “We want to use opportunity of this your 63rd birthday celebration to urge you to cast a gaze at us, senior citizens of Delta State that you suffered so much for. We had earlier drawn your attention to our plight in an SOS letter we presented to you, requesting your urgent intervention to our deplorable plight, yet to be paid gratuities and pensions, after 35 years of service to our State.

“We know that you are the leader of political leaders in Delta State and your influence over the Delta State Governor, Senator Dr Ifeanyi Okowa cannot be questioned. We therefore, urge you to use the joy of the moment, spirited by the celebration of your 63rd birthday, to prevail on Governor Okowa to pay attention to our plight.

“So many of our colleagues are in pitiable state of penury, with no money to take care of self and family after being disengaged from active service due to meritorious retirement. Many have died and many more are on the verge of dying. Among the recorded dead few clocked 63 but we who are still living, though almost half dead, hope to live on and up to 63 and even beyond. But only your quick intervention on our matter can guarantee such assurance.

“Please, do the best you can to gear the governor to respond to our call for help. You are a good man and will remain so all your life. This is our conviction in adding this plea to our goodwill message on the occasion of your 63rd birthday.

“We ask God to grant you many happy returns as you give a listening ear to our cry. Thank you and God bless you with many happy days ahead.” The retirees pleaded.

Conveying the reaction of the opposition party, the Publicity Secretary (Caretaker) APC Delta State, Barr Sylvester Imonina, noted that, the emotional laden message, filled with tales of sorrow; signed by the State Chairman of the retirees, is a reminiscence of “yesteryears slavery and man inhumanity to man”!

Adding that, “In the said birthday message of the senior citizens, a picture of how several members of the body die before attaining the age of 63, which Chief James Ibori recently celebrated, was painted. They were unequivocal on how the PDP led-Government of Sen. Ifeanyi Okowa has reduced them to walking ghosts.

“Though, there is no gainsaying the fact that Chief Ibori laid the foundation for the present crops of insensitive PDP Leadership in the State, which gave birth to what the senior citizens are suffering; but they felt Chief Ibori would be able to speak the language Sen. Okowa hears, hence their cry to him to prevail on the Governor for succour.

“It would be recall that in the past, Delta APC drew the attention of the public and the State Government to the horrible state of life of retired local government workers and primary school teachers. Unfortunately, because of the Governor’s Pharaonic disposition, nothing has changed!

“From available information at our disposal, those who retired from active service since 2014; which is well over seven years are yet to receive their pensions and gratuities. What a Government!

“It is annoying and painful that PDP led-Government in the State brags, and feels that no amount of hardships meted on Deltans, PDP will still have its way in future elections and governance of the State. What a sadistic mentality!

“Delta APC urges the senior citizens, our heroes and heroines and all people of goodwill not to lose hope of the future. All of us should prepare to end PDP led-Government locust’s reign in the State. Affairs of our dear State cannot continue to be left in the hands of those who see our fathers and mothers as less humans”, the party urged.