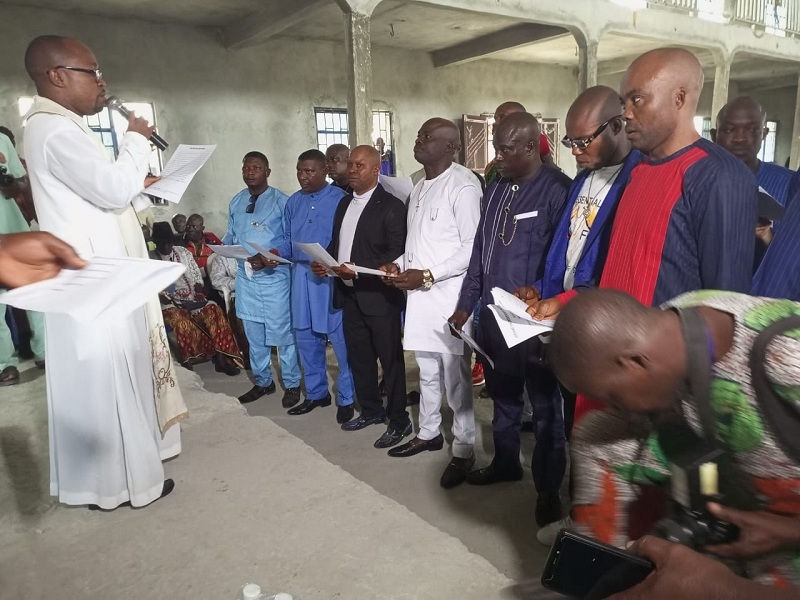 The swearing-in and oath of office ceremony was performed by a priest of the Roman Catholic Church, Rev. Fr. Daniel Odogoro, as witnessed by the eldest man of the community, Pa. Dominic Denedo, the incumbent and the immediate past President General of the community, Amb. Richard Ovwreghrederohwo, Mr. Victor Otumemine, community chiefs and host of others.

After the swearing-in of the new executives, Rev. Fr. Daniel Odogodo advised the new Exco to rule and serve the community throughout their tenure with the fear of God and should be of good character and ambassadors of the community by providing enabling environment for both indigenes and non indigenes alike, and also ensure there is mutual relationship in their course of serving the community and the people.

The newly sworn-in youth/employment committee chairman, Afiesere community, Mr. Ogwho Ogheneruemuse Samson in his acceptance speech, said today marks a new beginning of his administration to foster relative peace and bring development to the community, urging all quarters, groups and individuals to feel free seek my opinion whenever there are issues that needs quick attention.

The youth chairman said he also want to solicit the cooperation of the vigilante, elders in council, civil societies, women groups, Christian and traditional groups so as to ensure that his executives carries all along in the governance of the community by working with the central executives led by the president general, Amb. Richard Ovwreghrederohwo to move the community forward.

He commended the out gone chairman, Mr. Umukperuo Anthony, who during the period of the election, provided enabling environment for the Electoral Committee headed by Hon. Emmanuel Ogaga Umukoro for a hitch free election and promised to always seek advice from him any time the need arises.

The out gone youth/employment committee chairman, Mr. Umukperuo Anthony who spoke to newsmen on the successful election and swearing-in, thanked the electoral committee, security agencies and other members of the community for peaceful election and supports throughout his tenure, advising the new executives to ensure that the well being of the community should be their utmost priority.

He also commended the immediate administration of Mr Victor Otumemine who during his tenure, the community which was thrown into darkness for years, the electricity was restored back through their illustrious sons of the community, Chief David Edevbie and Mathew Edevbie and a host of others who were there for his executives during their tenure.