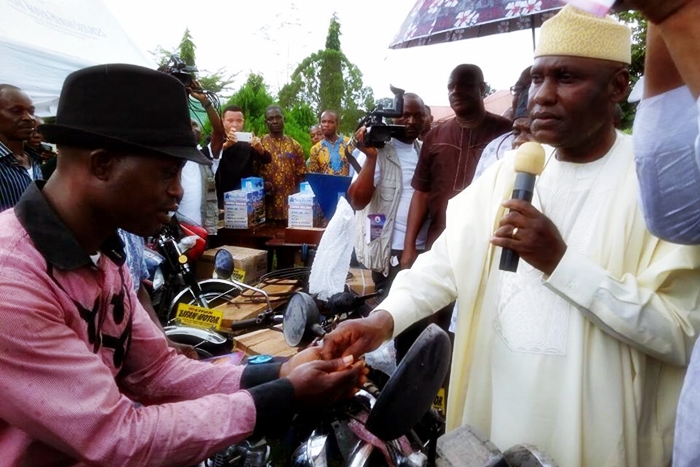 A People’s Democratic Party (PDP) Senator, Engr. Clifford Ordia has said that the 2016 Federal budget performance was not more than fifty percent.

The Senator regretted that the poor performance of the 2016 budget which was the first by the APC led Federal Government is responsible for the economic hardship being experienced today by Nigerians, including his constituents.

Senator Ordia who represents Edo Central Senatorial District in the Senate stated this on Sunday, 25 June, 2017 at Irrua, while rendering his mid term report to his constituents.

The Senator who also used the occasion to give out empowerment materials to some members of his constituency lamented that the change mantra of the APC has become synonymous with bad economic times.

This according to him, propelled him to embark on people oriented projects in Edo Central Senatorial District and regular empowerment of his people as part of his commitment to fulfil his electioneering campaign promises.

In his words, “As part of commitment to fulfil my campaign promises, I have undermined the recent glitch of “change” denoting bad economic times to embark on people oriented projects in some areas in my Senatorial District.

My office facilitated jobs placement for a number of youths into Federal Government parastatals and help secure admissions for prospective students seeking admission into several higher institutions in the country,” he said.

In his remarks chairman at the occasion, Senator Odion Ugbesia, commended Senator Ordia for his extra effort in networking to attract the projects he has executed in the past two years.

Senator Ugbesia appealed to the people to bear with Senator Ordia and other representatives pointing out that as law makers they have no power to award contracts.

“Please bear with Senator Ordia and others, because Ordia has no power to award contracts. These are his extra efforts in networking at the National Assembly. We urge him to do more”.

Also speaking, former South- South Secretary of PDP, Mrs Philomena Ihenyen thanked Senator Ordia for including women in his empowerment program. She urged politicians to ensure women are not marginalized in the distribution of political offices to encourage their husbands who permitted them to join politics pointing out that it is not in their place to say women’s place are in the kitchen as they have been a allowed by their spouses.

Empowerment items ranging from motor bikes, grinding machines for processing agricultural products, sewing machines and cash for start up micro enterprises were distributed to some members of the Senatorial District.

Keys of blocks of classrooms constructed by Senator Ordia were also given out to Principals and Headmasters of the benefiting schools.

A Thanksgiving mass was held earlier at Annunciation Catholic Church, Irrua, to thank God for the journey so far.

The Parish priest, Rev. Fr. Simon Peter Osinde thanked God for helping Senator Ordia to achieve what he has achieved in the past two years.

While testifying, Senator Ordia also thanked all Esan people for reposing in him enormous confidence by electing him to represent them in the Senate vowing not to betray their confidence.