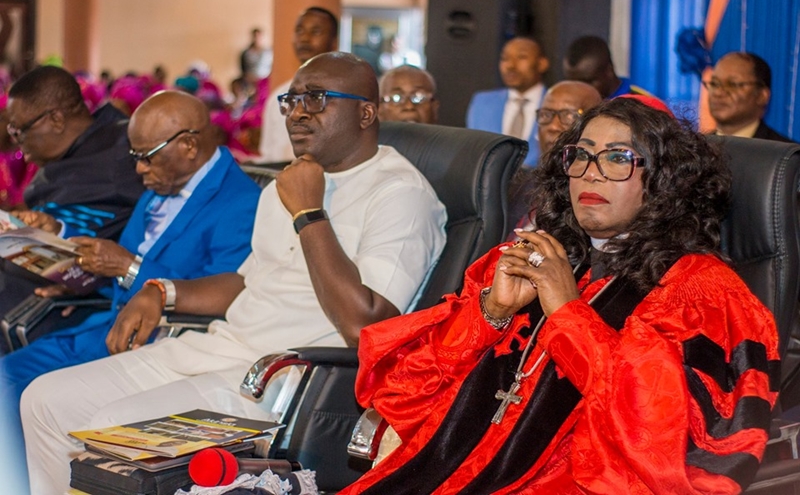 Delta State Governor, Senator Dr. Ifeanyi Okowa, has said the partnership between his administration and the church is yielding the desired benefits for the state.

The Governor, who was represented by the Commissioner for Basic and Secondary Education, Chief Patrick Ukah, stated this during the

dedication of the ultra modern church building of the Church of God Mission International, Asaba, on Saturday, July 6, 2019.

He congratulated members of the church for their zeal and determination which propelled them to see the gigantic project through from the foundation laying to the completion.

Also speaking, the Presiding Archbishop of Church of God Mission International, Most Rev. Dr. Margaret Benson-Idahosa, showered praises on Governor Okowa for his commitment to the things concerning God which made his reelection for a second tenure in office a reality.

She congratulated the Governor on the occasion of his birthday celebration coming up tomorrow and wished him good health and more fruitful years ahead.

The Presiding Archbishop prayed to God to increase Governor Okowa’s house, his cabinet and the state as a whole and guide him to provide more dividends of democracy for the people of the state in his second tenure.

In his own address, the Zonal Coordinator, Asaba Zone 1 of the church, Rev. Moses Osayomwanbo, revealed that from the foundation to the completion of the building, the church did not borrow from outside nor did any launching for fund raising but rather everything was made possible by the huge sacrifice and strong commitment of members of the church.

In the course of the ceremony, Most Rev. Dr. Benson-Idahosa cut a birthday cake presented by the church in commemoration of her birthday ceremony.

High point of the occasion was the anointing of the gates and doors of the church and the dedication of the altar to God.

The Speaker of the state House of Assembly, Rt. Hon. Sheriff Oborevwori, was represented by the member representing Ika North East in the Assembly, Hon. Anthony Elekeokwuri, the state Head of Service, Mr. Reginald Bayoko, represented by the Permanent Secretary, Ministry of Housing Dr. Christian Ukpe, among other dignitaries, attended the event.