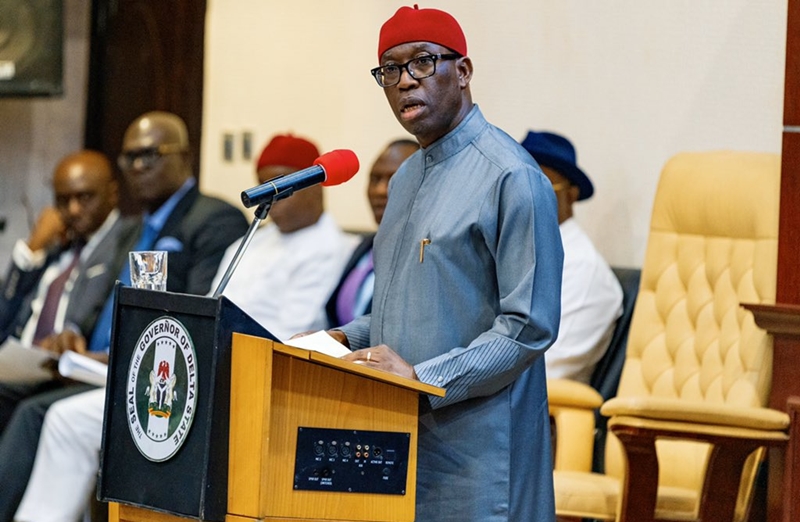 The governor announced that Capital Expenditure of the budget would gulp N217.64 billion representing 55.92 per cent and that N171.55 billion or 44.08 per cent had been earmarked for Recurrent Expenditure during the period.

Okowa said that the 2020 budget would help his administration to achieve fiscal stability and promote accountability as imperatives for sustained economic growth.

He said that he would prioritize efficiency in expenditure through stringent control on non-productive expenditure, judicious allocation of resources and cost effectiveness of project delivery.

The governor also stated that the budget would accelerate rural-urban integration and urban renewal through roads and flood control infrastructure, markets development, housing and sanitation.

He said it was targeted at growing the non-oil sectors to produce an economy that was truly diversified, self-reliant, resilient and could withstand external shocks.

“During the fiscal year, we will continue to pursue Health for all Deltans (HeFAD) in line with the Universal Health Coverage mandate of the United Nations Sustainable Development Goals.

“Through the budget, we will increase investment in youth entrepreneurship development programmes as well as technical/vocational education designed to foster a new generation of wealth creators, business leaders and managers. “It will deepen and strengthen our social investment programmes for improved protection of the poor and vulnerable segments of the society, and escalate our peace-building initiatives to secure our oil and gas installations.

“It will ensure public safety and engender an investor-friendly climate, boost revenue through widening of the tax base and administration of a functional tax regime that is fair, just and equitable and engender a more responsive and efficient public sector,” he said.

Road and Physical Infrastructure sector was allocated N84.54 billion, the highest amount of the budget and was followed by Education with N31.6 billion.