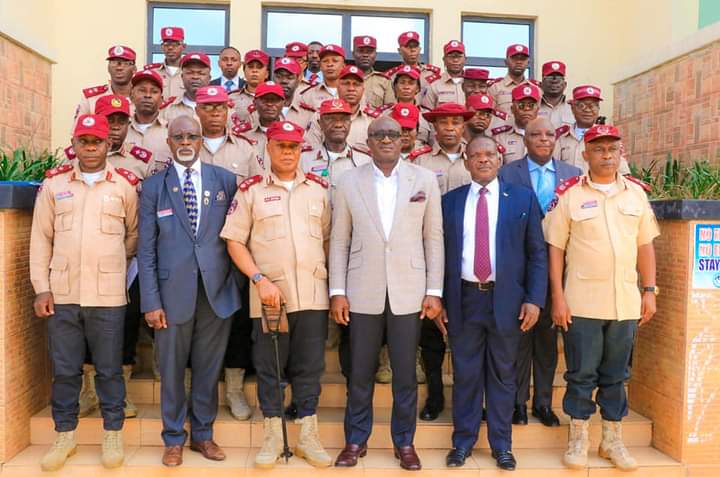 Delta State Government has assured the Federal Road Safety Corps (FRSC) that it will continue to partner with them towards achieving zero traffic crashes on roads in the country.

The Secretary to the State Government (SSG), Chief Patrick Ukah, gave the assurance when he played host to staff and students of Senior Course 1 of the Federal Road Safety Corps Command and Staff College, Udi, Enugu State, in his office in Asaba, who are currently on a study tour of the state.

Chief Ukah said over the years, the state had established sustained partnership with FRSC, which has helped the agency in the implementation of of it’s 6 point approach to the problem of road accidents.

He said the theme of the study tour, “Enhancing Road Safety Partnership for Innovative Intervention”, was apt as the nation was currently grappling with high rate of road crashes in the country.

The SSG noted that in line with the study tour theme, the state government had exemplified the spirit of cooperation for development and offered tremendous support for smooth operations of the FRSC in the state.

Chief Ukah stated that the collective responsibility between the state and the agency had led to the construction of a modern and well equipped Marshal Inspectorate Training School (MITS), Owa-Alero, for top quality manpower development.

Chief Ukah also stated that as part of the collaboration with the FRSC, the government built and equipped a befitting office accommodation for the state’s Sector Command of the FRSC in Asaba, while also providing vehicles for them to enhance their operations.

Earlier in his remarks, the Commandant of the FRSC Command and Staff College, Assistant Corps Marshal Nseobong Charles Akpabio, said they were on a study tour of the state to study leadership and command structure of states and agencies that they collaborate with.

He commended the state government for intervening in road safety issues, which has greatly helped the FRSC state Sector Command to effectively carry out their road traffic management functions without a hitch.