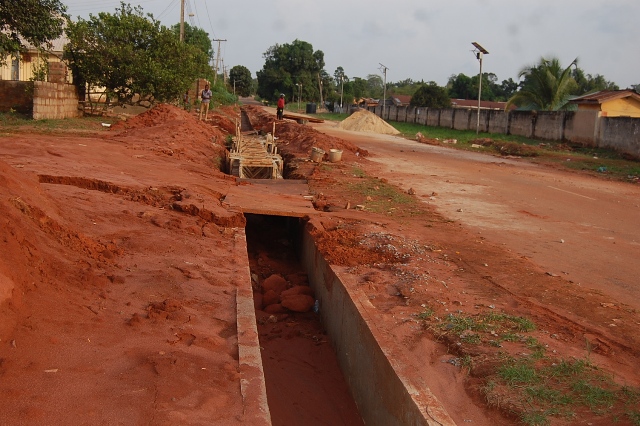 Ongoing construction Work on Constituency Projects and other projects attracted by the Minority Leader of the House of Representatives, Rt. Hon. Ndudi Elumelu, located across Aniocha/Oshimili Federal Constituency in Delta state, has steadily progressed with some completed and waiting for commissioning.

All of the Projects, which are meant to directly impact on the lives of the people of the federal constituency when fully completed, were commenced in the fourth quarter of last year.

A visit to the project sites by a team of selected journalists, on Friday April 8, 2022, for on the spot assessment of the level of work, confirmed that four of the Multipurpose Community halls located at Nsukwa, Olodu, Ezi and Idumuje-Ugboko, have been completed while that of Issele-Mkpitime is still ongoing with about 80% of the job done.

In an interview with the site Engineer at Issele-Mkpitime, he gave his firm commitment of rounding up work on the project in two weeks, adding that circumstances beyond his control militated against his not being able to meet up on the due date.

At Obomkpa and Idumuje-Unor, where Palaces are being constructed for the traditional rulers of the communities, the level of work was about 80 percent completed with the site Engineers promising to deliver the projects on or before the second week of May, noting that they are being careful to meet with the set standard and specifications.

Speaking with Journalists at the Idumuje-Unor Palace project site, the traditional ruler of Idumuje-Unor, His Royal Majesty, Obi Charles Anyasi, the III, Obi of Idumuje-Unor, commended the Minority Leader, Rt. Hon. Ndudi Elumelu, for not only remembering the people of his community with such a laudable project, but for his commitment and sincerity of purpose, in ensuring that the right thing is being done by the contractor and the Engineer, even as he appealed for the quick completion of the Onicha-Uku/Idumuje-Unor road project, which he noted will add additional value to the lives of the people.

Also in his reaction, the Monarch of Obomkpa kingdom, His Royal Majesty, Obi Onyemaechi Josiah Kanyinaga I, was full of praises for Rt. Hon. Ndudi Elumelu, and said that the entire people of the Community are happy with the level of transformation he is bringing to bear in their lives with the construction of a mega palace and other projects for them.

He commended the quality of the job being done on the project and said that the people of the constituency have never had it so good in governmental representation at the Federal level, even as he prayed God to continue to give the Minority Leader all that is needed to do more for the people.

Work has equally progressed considerably at Ugbodu/Ohordua Ecological project site located at Ugbodu, with the construction of the necessary drains to control the massive Ecological problem in the area, as well as the ongoing bridge to link the Aniocha/Oshimili Federal constituency with Edo state, through Ohordua.

According to the site Engineer, Engr. Austin Azih, they have achieved one point zero eight kilometers of the specified drains, and they are introducing culverts where they are needed. Box covers are being constructed at the river to carry the bridge head, blinding has been done with headwall to increase the height of the bridge, and they are still pumping water out, as a result of heavy underground water.

Engr. Azih said that the rain that fell on Thursday night (7/4/2022) had posed a great challenge for them, but that they have taken full control and were at the moment, tackling the problem headlong, even as he commended the Minority Leader and the people of Ugbodu for their maximum cooperation.

The Vice- Chairman of the Ugbodu Progressive Union, Dr. Festus Ashiedu, who was also on ground at the site, commended the pace at which the work is progressing and while expressing the appreciation of the traditional ruler and the people of Ugbodu kingdom, to Rt. Hon. Ndudi Elumelu for attracting the project, commended President Mahammadu Buhari for approving the release of the needed funds for the project.

He said that the Obi and the entire people of Ugbodu are happy with the proactive representation of the people of Aniocha/Oshimili by Rt. Hon. Ndudi Elumelu at the National Assembly, describing him as a leader who has the reach and the heart for service to the people.