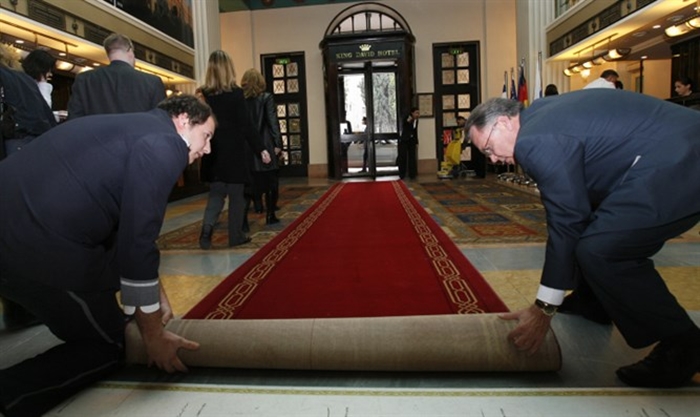 More than 10,000 police officers and other security personnel will take part in securing the two-day visit of US President Donald Trump to Israel, expected to take place on May 22-23.

Trump will arrive at Ben-Gurion Airport, whence he will fly by helicopter to Jerusalem to visit the Old City and Yad Vashem, and sleep in the King David Hotel’s presidential suite.

Officers from the full range of regular and special patrol units including undercover units, border police and counterterrorism units will secure the visit, police spokesman Micky Rosenfeld told The Jerusalem Post on Sunday.

The Israel Police are operating in coordination with the Shin Bet (Israel Security Agency) and Trump’s Secret Service detail for the visit.

Police have prepared a contingency plan in case inhospitable weather forces the US president to drive from the airport to the capital. “The second option means hundreds of officers along Route 1,” Rosenfeld said, which would cause lengthy delays for commuters.

Major traffic disruptions are expected in Jerusalem during Trump’s stay, and Yad Vashem will be closed to all visitors on the day of the presidential visit.

From Jerusalem, Trump is expected to visit Masada and Bethlehem, flying in a helicopter in coordination with the police and the IDF.

The Masada fortress will be under heavy security for the president. “Soon as it is locked-down you’ll be able to hear the birds tweeting to one another,” remarked Rosenfeld.

Around 900 personal, and 56 vehicles, including 14 limousines, will accompany Trump to Israel, Channel 2 reported on Saturday. Around 30 C-17 transport planes will land in Israel carrying bullet proof glass to be installed in the president’s hotel suite, and hundreds of tons of other equipment, according to the report.

Trump and his wife, Melania, will stay in a room 140 square meters in size which includes a kitchenette with a separate entrance, a jacuzzi and a panoramic view of the Old City.

According to Haim Shkedi, General Manager of the King David Hotel, the Americans “don’t have any special demands. They know the hotel. They don’t have any unusual expectations. They want to be able to work.”

“They are all very friendly, but we had a special connection with Clinton when he came for Rabin’s funeral,” Issam Janah, service manager at the King David Hotel, tells Channel 1 News. “He shook everyone’s hands, he was friendly.”