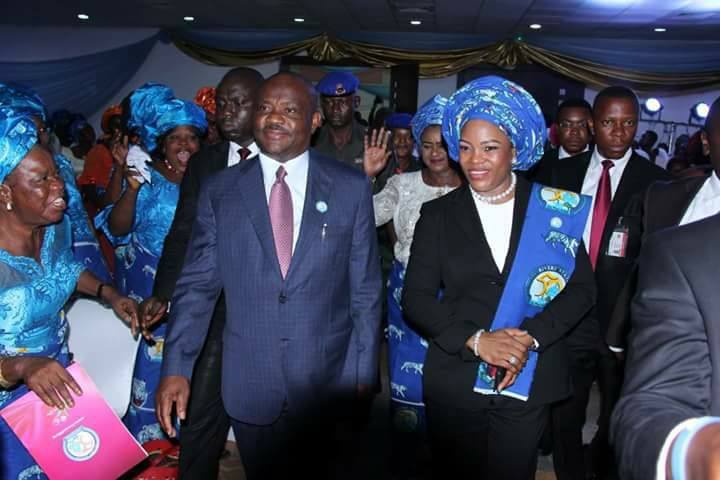 Rivers State Governor, Nyesom Ezenwo Wike has advised women to struggle for power, rather than expect that men will bequeath power to them on a platter of gold.

Also, Wife of the Rivers State Governor, Justice Eberechi Suzzette Nyesom-Wike described her husband as a women-friendly governor who is implementing policies and programmes to uplift women.

They spoke at the Women’s Day of the Rivers Golden Jubilee Celebration in Port Harcourt on Thursday, May11, 2017.

Governor Wike said that nobody is stopping women from excelling in the political arena, pointing out that women must work for their political emancipation.

He said: “When it comes to power, you have to struggle for it. If you are prepared for politics, you must equipment yourself “.

The governor urged women not to beg for positions. He said they should set up structures that would help them get political mileage.

He, however, assured Rivers women that he will continue to work for their development and growth in all spheres of life.

The governor announced that his administration will construct a women development centre with all facilities to empower Women.

She said that the governor’s choice of female deputy governor and the appointment of the first female Chief Judge and President of Customary Court of Appeal ensured that Rivers women took their pride of place in politics.

Wife of the Rivers State Governor, Justice Eberechi Suzzette Nyesom-Wike said the Women’s Day is set aside to honour women for their contributions to the creation and growth of the state.

While saying that efforts to empower Women must be strengthened, Justice Nyesom-Wike noted that women have attained positions of responsibility, not envisaged before.

In her guest lecture, Wife of Former President of Nigeria, Professor Uche Nnamdi Azikiwe said violence can only be reduced across the world when women assume leadership.

In her paper titled: “Status of Women and politics in Nigeria “, Prof Azikiwe said the political marginalisation being suffered by women are man-made.

She urged women to unite and play significant roles in their respective communities. She called for urgent steps to address the dwindling fortunes of women in Nigerian politics.

Chairman of the Rivers Golden Jubilee Committee, Chief Ferdinand Alabrabra lauded Rivers women for their roles in the development of the state.