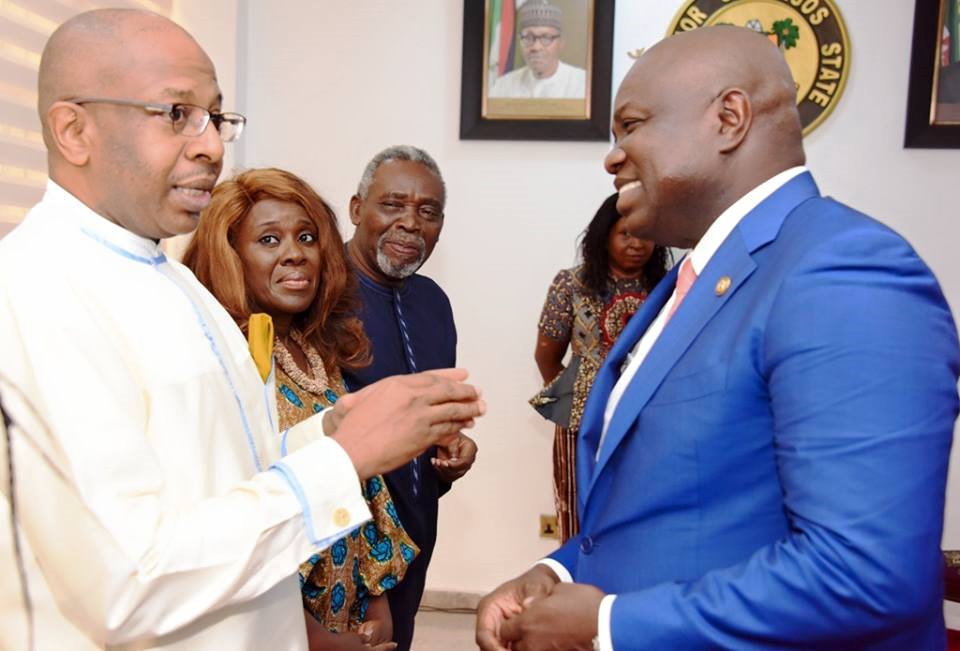 Lagos State Governor, Mr. Akinwunmi Ambode on Thursday said his administration has concluded plans to begin a total revamping of the National Arts Theatre in Iganmu, Lagos by next month in time for the 2017 Africa Movies Academy Awards (AMAA) ceremony holding in the State later in the year.

Governor Ambode, who spoke when he played host to officials of AMAA led by its President, Mrs. Peace Anyiam-Osigwe at the Lagos House, Ikeja, expressed optimism that the plan to upgrade the Theatre to world class standard would serve as a viable venue for the AMAA event when completed.

“I want to also say that I am very particular about the venue of the AMAA, so we would use everything possible to make sure that the National Arts Theatre is ready. We are in a process and before the month ends, we should have something to start doing within the first week of April to getting the whole place ready,” he said.

Alluding to the fact that Lagos would turn 50 by May 27, the Governor said that the hosting of the AMAA event in Lagos would add more glamour to the celebration of the State’s Golden Jubilee and showcase its hospitality to the continent and the world at large.

“This is a very historic moment for us in Lagos. 2017 we are celebrating the existence of Lagos for 50 years. If you look at the calendar, you would wonder in what ways and manner can we celebrate Lagos?

“Without your sector, there is no Lagos. So, when we say 50 years, we are talking about 50 years of history, so somebody documents it, somebody dramatizes it, and then somebody keeps it, so that those who are yet unborn would see it, so even when we are not there, it would be displayed through your creative talents,” he said.

Governor Ambode said the recent interventions of his administration in the creative industry was in line with his belief that it represents a new opportunity for economic development and unleashing the potentials of youths, assuring that he remains fully committed to breaking the barriers weighing down the industry from thriving.

“We are in a synergy process. Government might not have put so much effort in creative arts, but that’s the new vista that we are going to. We have come to the end of white collar jobs, we are into the era of creativity and innovation and then it’s only a good government that has vision that can actually understand that we need to break down the barriers that allow people with talents to actually display where the real God given asset is. Yes, it’s lowly priced here, so we are just in a joint step here to say that for the very first time, we would deliberately attack the impediments that allow people not to thrive in the creative industry.

While officially accepting the hosting rights for AMAA 2017, Governor Ambode said the State would take advantage of the opportunity to boost its tourism mileage beyond Lagos @ 50.

“The whole essence is to grow the GDP of Lagos; it would bring people into Lagos, they would stay in our hotels, they would come watch the movies and then they would pay their taxes and eventually it’s a conglomerate of goods and services that would escalate our GDP,” the Governor said.

Earlier, President of AMAA, Mrs. Peace Anyiam-Osigwe commended the Governor for his interest in the creative industry, saying that it has given the sector a major boost in recent time.

“It’s amazing to have a Governor who is like a family that seems to understand what our needs are. We’ve never had a Governor of Lagos State who has shown so much deep interest in Nollywood,” she said
She said the 2017 AMAA ceremony, the 13th in the series would feature films from 72 countries with over 23,000 guests from across the African continent vying for various awards.