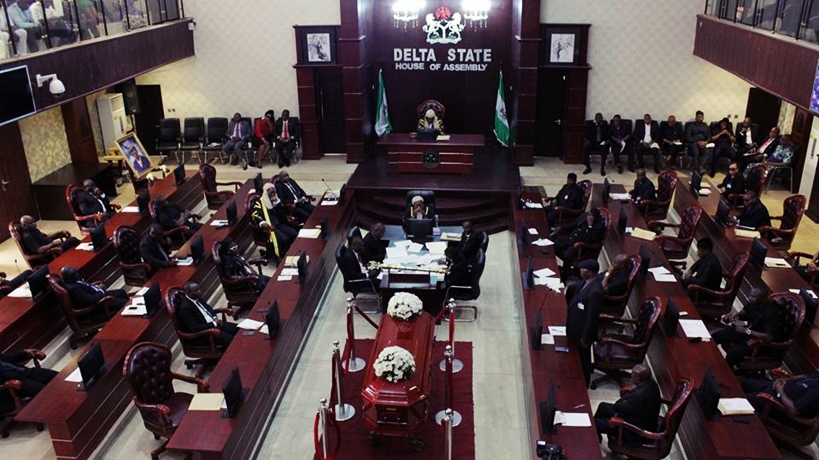 The remains of the lawmaker was welcomed into the main Chambers of the House after the suspension of Rules 70 and 137 of the Standing Orders to enable the house admit strangers to participate in the file past of the lying-in-state of the departed colleague.

The session which drew the presence of past principal members of the House, members of the Delta state executive council, family members, party faithfuls, friends and associates of late Omawumi, witnessed series of outpouring tributes and encomiums.

In his speech, the Speaker of the Delta State House of Assembly, Rt. Hon. Monday Igbuya described the late Omawumi as the Jewel of the House, a woman who lived a life of distinction and predestined for an active life in the service of the people.

Former speaker of the House, Rt. Hon. Victor Ochei eulogized the late lawmaker’s peaceful wit in quelling issues and rancor within members and in the affairs of the state generally.

Others were the Chief Judge of the State, Marshal Mukoro, House of House of Reps member, Hon. Amaechi Mrakpor and former member, Hon. Okonji.

After the valedictory session, the Speaker declared the seat of the of the late lawmaker vacant which marks the kick off of political contest for the soul of Warri South 1 constituency.

She was a member of the People’s Democratic Party (PDP), on whose platform she was elected member of the Delta State House of Assembly in 2003, 2007, 2011 and 2015 respectively.

She died on Tuesday, December 13, 2016 in the United Kingdom after a long-battled illness.