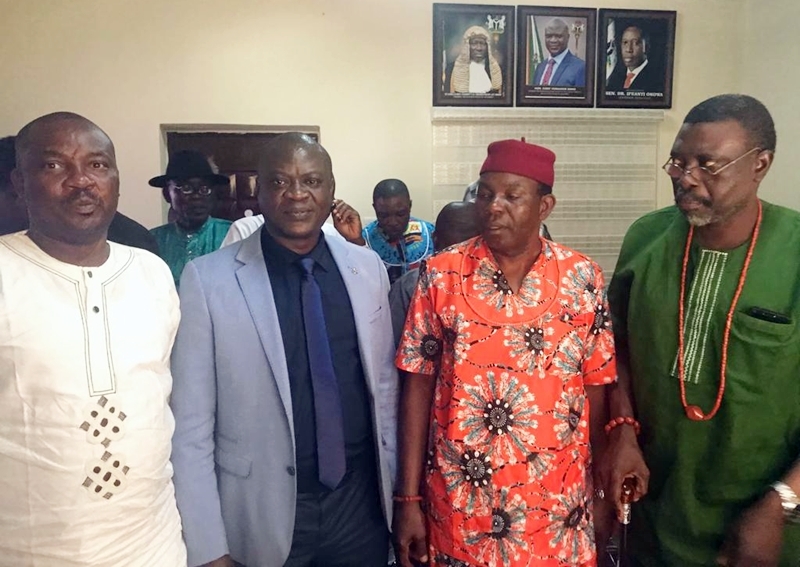 The Member representing Isoko South Two Constituency in the Delta State House of Assembly, Hon Ferguson Onwo has assured the people of Umeh and Erohwa communities that they will not be left out in terms of practical development as the Okowa administration was determined to build a stronger Delta.

Hon Onwo stated this when the President Generals of Umeh and Erowha communities, some community leaders and PDP Stakeholders paid him a courtesy visit in his office at the Assembly Complex, Asaba.

He said he will not fail in delivering his mandate to Umeh and Erohwa communities as he was determined to change the narratives for good.

The Lawmaker noted that both communities had always supported his political aspirations, stressing that whatever was due to them would not be denied the communities as development was key to advancing the standard of life.

Hon Onwo maintained that no effort would be spared in attracting development to Umeh and Erowha communities and solicited the continued support and cooperation of the people at all times.

He promised to look into all the issues raised by the communities on appointment, power supply and development with a view of giving the people a sense of belonging.

Hon Ferguson Onwo urged the people to double their support for the Okowa administration saying that his electoral victory and subsequent inauguration into the Seventh Delta Assembly House of Assembly was made possible by God and their support hence would reciprocate the gesture.

The President Generals of Umeh community, Mr Phillips Agajere and Erohwa community Mr Godwin Amghemeno and PDP leaders including Sir Pius Emamowho, Comrade Dennis Akwakwa and ThankGod Adanegba said the visit was to congratulate Hon Ferguson Onwo on his electoral victory stressing that they have been part of his dream of becoming a lawmaker since he started contesting elections to represent them at the State legislature.

They said before his electoral victory he was committed to the development of Umeh community by roofing the town hall with personal funds and expected him to do more now that he is their representative at the State legislature.

While pledging their unalloyed support to him, the community leaders expressed worry that no Umeh indigene had been given political appointment in the previous administrations and appealed for political inclusion the the present dispensation.

The leaders drew attention to the indebtedness of the Umeh community to the Benin Electricity Distribution Company hence it’s disconnection from the national grid and the need to rehabilitate Umeh township roads constructed by NDDC in 2018 among others.

They promised to continue their support to the Okowa administration in order to attract more development.