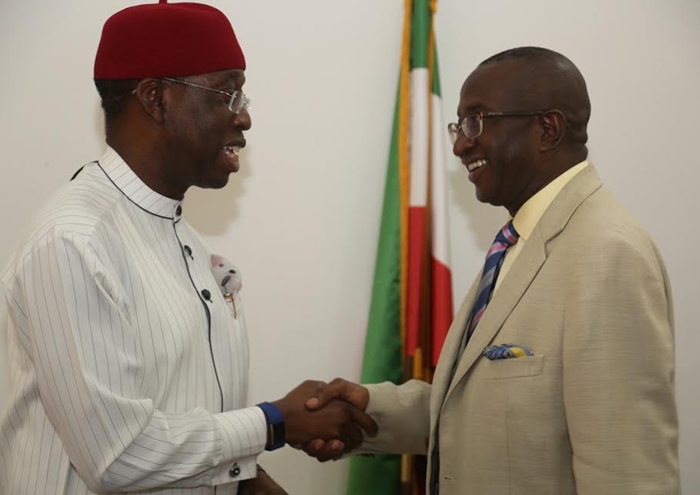 Delta State Governor, Senator Dr. Ifeanyi Okowa has assured that the state would partner with the Niger Delta Development Commission NDDC, in the proposed construction of the Omadino-Escravos – Okenrenkoko road.

Okowa gave this assurance Thursday when the Chairman of NDDC, Senator Victor Ndoma Egba, led management of the agency on a courtesy visit in Asaba, stating that “this is an important road that crisscrosses two major oil producing nationalities in the state.”

He said, “I want to welcome the spirit of partnership and we are ready to cooperate with you on the development of the Niger Delta Area, the state and your Agency need this cooperation to help our people.”

“We need to create room for the contribution of the people in project planning and execution. l agree with you that we need projects that will impact more on the life of the people.”

In his address, Senator Ndoma Egba, said that they were in the state to solicit the support and partnership of the state government in its ongoing reforms of the NDDC, in urging the Federal Government to re-constitute the Advisory and Project Monitoring Committees of the agency to improve accountability, transparency, cooperation and partnership.

He said that the agency was desirous of carrying out joint venture projects with member states in the spirit of partnership stressing that to create an enabling environment for the relocation of the International Oil Companies (IOC’s) to the area, the NDDC would soon construct a fiber optic network in the region to deepen internet penetration and speed while a Niger Delta Development Bank will be established to carter for development of the area beyond oil.

While assuring to support and cooperate with the ongoing reforms by the commission, Okowa called for proper monitoring of projects as it is vital in the execution of projects.

“l want to call for proper monitoring of projects especially road projects and the need to strengthen and fund the department of quality delivery because it is important in the execution of projects,” the governor harped.

Okowa also advised the agency to collaborate with the Senate Committee on Niger Delta on the funding of NDDC projects and supported the call on the Federal Government to re-constitute the Advisory and Project monitoring committees of the Agency stating that it will deepen the partnership between the state and NDDC in meeting the needs of the people and creating room for the people of the area to contribute to developmental projects, planning and execution.