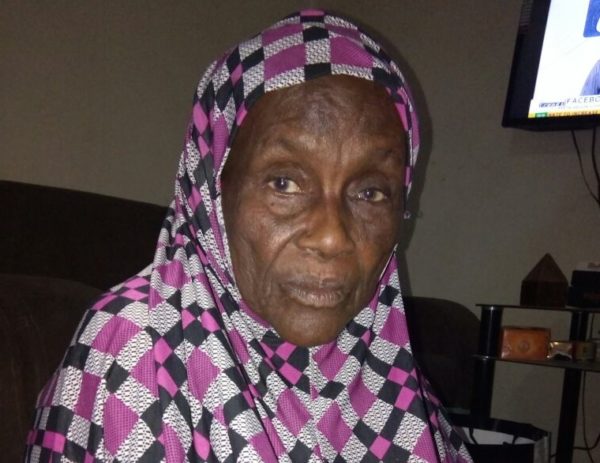 The elder sister of President Muhammad Buhari, Hajiya Rakiya, has appealed to Nigerians to continue to pray for the well being of her younger brother, the President, instead of spreading rumours about his health.

In an interview with a correspondent of the News agency of Nigeria in Daura, Katsina state, the 84-year-old said the president needed the prayers of every Nigerian for him to succeed in the task of addressing the problems facing the nation.

She said President Buhari being a mortal is bound to fall ill or even die “at any time his Creator wishes’’.

She said she speaks with the president everyday since his departure to London on his annual leave and he is in high spirit.

“We were 28 from our mother late Hajiya Zulaihatu who died in 1992,but Buhari was her last born” she said.

A cross section of the people in the ancient city, who spoke with NAN, said they were dismayed with some Nigerians , spreading unfounded rumours about the president’s health.

Alhaji Abdulman Daura, the Northwest organising secretary of the All Progressives Congress (APC), described the rumoured death and state of health of the president as baseless and unfounded.

Daura said Buhari is in good health and is only conducting a routine medical checkup in the United Kingdom.

He advised the opposition to always be constructive and avoid campaign of hate and calumny, adding that it is only God that gives health and takes life.

Similarly, Alhaji Aminu Na-Dari, a close ally of President Muhammadu Buhari said he has also been in constant touch with the president since his departure and their conversation did not in anyway indicate that he is having any health challenge.

He said the current economic hardship was not caused by the present administration. On the contrary, the Buhari government has been working hard to remedy the situation.

A group of students of the School of Health Technology Daura described the rumour as unfortunate and asked the National Association of Nigerian Students to issue a statement condemning the rumour.

Aminu Mohammed, the spokesperson of the students,called on Nigerians to always think and act positive,stressing Buhari has started the reform of correcting the ills of this nation and corruption was now fighting back.

He urged Nigerians to continue to pray for the nation and safe return of Mr president.

Alhaji Salisu Haro, the information officer of Daura Local Government Area,also told our correspondent that the local council was conscious of the rumour ,stressing it was a mere political gimmick fabricated by enemies of progress.

He said the local government has collaborated with the Daura Emirate council to find out the true situation.

“Our findings revealed that Mr president was doing very well and there is nothing to fear”, he said.

Also Mr Emeka Chidozie, a businessman and a resident of Sabongari community in Daura , expressed sadness over the rumoured death of Mr President.

He called on federal government to regulate the social media as some individuals use the platform to cause confusion and apprehension, which threaten the peace and unity of the country.

NAN reports that the people and residents of Daura were going about their normal business in the ancient city.