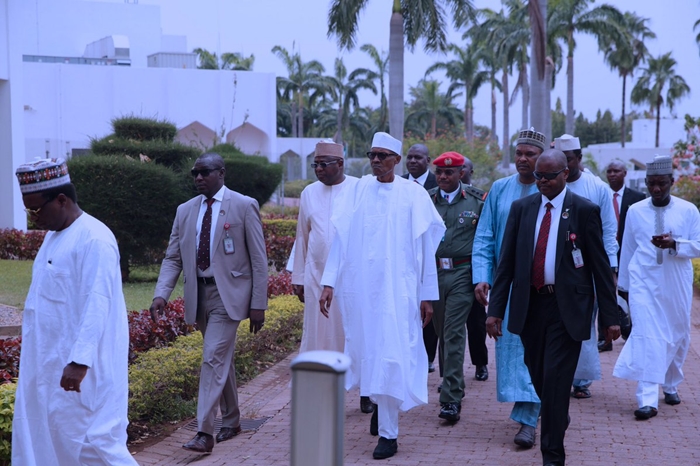 He was joined by the Attorney General of the Federation, Abubakar Malami; the National Security Adviser, Mohammed Babagana Monguno and other officials.

This Public appearance comes less than 48 hours after the President missed the Federal Executive Council Meeting for the third time since his return from medical vacation in the United Kingdom.

The president, who has been ill, had not been seen in public for weeks and has not disclosed the nature of his ailment but his wife, Aisha, said his health was not as bad as “perceived”.

Speaking on the prevailing health condition of Mr. President, the Minister of Information and Culture, Lai Mohammed, and other government officials, said he was carrying out his responsibilities as President, while also following his doctor’s orders that he should take things slowly.

A statement which has generated ripples in some sections of the country.

President Buhari who was escorted by a retinue of aides, walked briskly from his official residence to the Mosque and back, covering about 600 metres.

Despite the President’s absence from public functions, the Attorney General of the Federation, Abubakar Malami; the Group Managing Director of the Nigerian National Petroleum Corporation, Maikanti Baru; and the Central Bank Governor, Mr. Godwin Emefiele, all said they held meetings separately with him this week.