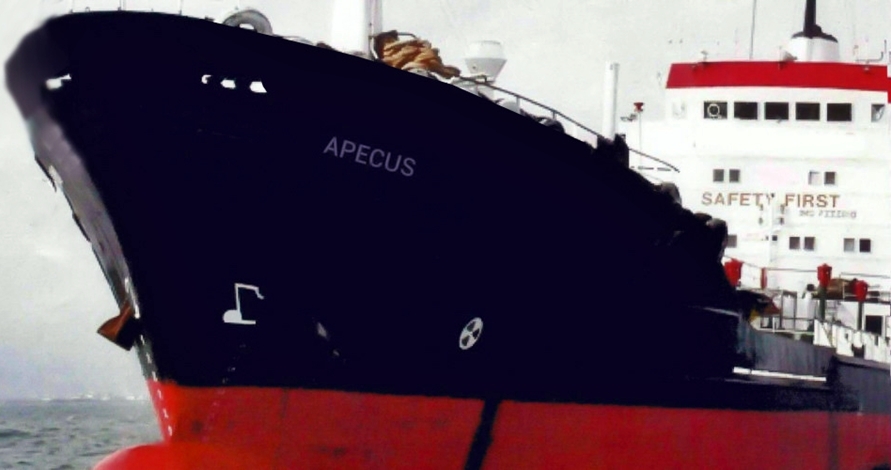 …Claim Vessels Were Not Out For Illegal Oil Deals
…Describe Prosecution of 17 Crew Members As Unjustified
…Declare Arrest of Vessels By Nigerian Navy As Illegal, Unconscionable

Owners of the Vessels,  MT APECUS and MT INVICTUS have petitioned the Permanent Secretary and Solicitor General of the Federation, Federal Ministry of Justice over the kidnapped of Mr Charles Marccathy, a Ghanaian national  and the alleged indiscriminate detention and prosecution of 17 Crew members by the Nigeria Police (SCID), Port Harcourt as well as the unlawful arrest of the two Vessels by the Nigerian Navy, Pathfinder Base, Port Harcourt, Rivers State.

In a  worded Protest Letter dated July 10, 2019, by Babajide Law Firm, the Law Firm to the owners of the two arrested Vessels, they kicked against what they described as the unfortunate abduction of one of their staff Mr. Charles Maccarthy (Ghanaian), the unjustified prosecution of 17 crew members as well as the illegal and unconscionable arrest of the vessels MT. APECUS and MT. INVICTUS by the Nigerian Navy, Pathfinder Base, Port Harcourt, Rivers State without any probable justification in law.

According to the petition, “Our clients are the Owners of the vessels MT. APECUS and MT. INVICTUS and employers of 17 crew members who have been charged on suspicion of attempting to load and steal Nigerian crude oil and incarcerated in Port Harcourt prisons”.

“On Friday 19th April 2019, and while the vessel was waiting at Bonny outer anchorage, around 14:30 local time, Owners received an emergency /alert from Captain AKPATA that vessel was under attack by sea-pirates and his attempts of requesting help by the Navy gunboat “which actually was very close to vessel became of no avail”, they stated in the petition.

“Owners reported immediately the incident to their local representative and the Captain of their sister vessel (MT INVICTUS), requesting all of them to provide any possible assistance and report to Navy base. Owners kept calling the vessel’s satellite phone but to no avail, until almost five hours later the Chief Engineer on board MT APECUS reported the kidnap of six seafarers, five of whom are Indian Sailors and the captain, a Nigerian nationality, by Pirates. Seams that for 4-5 hours the pirates were on board, without fear for an “action” that probably would be taken by Navy. The kidnapped victims were taken ashore from the vessel in the outer anchorage and remained in hostage for over 60 days without any concerns, inquiries or criminal investigation by the Federal Government”, they wrote further.

The owners of  the Vessels, MT. APECUS and MT. INVICTUS, according to the petition, were left with no superior alternative than to liaise with the locals to investigate the dastardly act with a view to securing the release of the victims by all means possible, while the local authorities and particularly the Navy did not take steps or efforts to provide any help.

They stated that after long negotiations with sea-pirates, the ransom amount agreed and the procedures of the delivery of ransom and the release concluded, adding that upon the payment of a huge ransom, the six sea farers were released on the 26th June, 2019, revealing further that; “In view of the lack of any support by authorities, the Owners decided and engaged local people and particularly they asked Mr. Charles Maccarthy, a Ghanaian National, to provide help. While Maccarthy was serving as a functional bridge between the Owners of MT. APECUS and the abductors, he was captured in the mid-night hours of 26th June 2019 in the course of paying the ransom in exchange for the release of the six seafarers”.

The petition read thus; “Mr. Charles Maccarthy is currently in captive and so remains even till the time of protesting this inhumane and abominable aberration. It is indeed a saddening and ignoble phenomenon in the annals of this country where human life has been reduced to a price commodity by malefactors who have turned kidnapping of persons to a transactional enterprise and have thus brazenly challenged the effectiveness and efficiency of our security intelligence and policing architecture”.

They posited that; “In the light of these appalling realities, we urge the Federal Government of Nigeria to be quick off the mark in saving the innocent life of Mr. Charles Maccarthy by securing his immediate release without further delay”.

They described the bail conditions for the release of the 17 crew members as extremely oneness, outrightly unfeasible and ultimately beyond the realm of practical obeisance.

“The foregoing re-states the obvious and reinforces the compelling fact that this whole prosecuting venture is nothing but a sham calculated to mislead the public, victimize innocent persons and present a complimentary scorecard of operational efficiency at the peril of the 17 crew members in detention.

“May we for emphasis sake and for the records, maintain that the framed charges against the 17 crew members on board the vessels MT APECUS and MT INVICTUS cannot be sustained by any evidence. It is crystal clear that there is no available evidence to support the alleged charge. What is more, an allegation of crime without proof remains what it is, an allegation and cannot on any reasonable pedestal ground conviction. It is in wake of this critical impasse that we call upon the Federal Government of Nigeria to rise to the occasion and intervene by securing the emancipation of the 17 crew members who have hitherto been deprived of their basic right to freedom”, they said in the petition.

According to the petition also; “The Vessel MT. APECUS sailed from Ghana where she has been trading and employing there since 2013 and after such long period, she only proceeded last April to Lagos to get supplies, spare parts, and crew members, where she arrives at the anchorage on 3rd of April 2019. On April 14, 2019 she sailed from Lagos and proceeded to Calabar in ballast/empty condition, in order to perform a charter employment. During her passing from Bonny, on April 18th late night, the Captain reported a maneuvering and windlass malfunction and damage caused and requested permission to enter Bonny anchorage to seek for repairs and supplies.The vessel returned to Bonny and arrives at outer anchorage on Friday, 19th April around 10:30 am where she anchored waiting for the Owners to arrange and obtain a new Naval clearance for entering in the inner anchorage, for which the Owners ordered their agent to proceed and arrange the issuing from Navy.  Around 14:30 same day, the Owners received an alert from the Captain that the vessel was attacked by pirates and then the communication lost till 19:00 hours local time. The owners immediately directed their agent to contact the Navy and report the incident in order for the Navy to rescue, assist/protect the vessel and her crew”.

They said the Owners subsequently discovered from the Chief Engineer that six crew members including the Captain and five Indian nationality have been kidnapped by pirates and left with a speedboat, adding that on the same day, Friday 19th April, the Owners requested the Chief Engineer to do the utmost and shift the vessel with the remaining crew and shelter her in the inner anchorage, where the vessel anchored late night.

“Owners ordered their agent to provide any help and support to the crew, while Owners force the agent to file a report to the authorities about the incident.

On Monday 22nd of April, Owners noted through locals that their agent were taken by the Navy and on Tuesday 23rd the Chief Engineer reported that all remaining crew taken ashore by Navy personnel for interrogation.On 22nd of April around noon, the Chief Engineer notified the Owners that Navy personnel boarded the vessel and detained all the crew.Since then the vessel and the crew has been detained without any prospect of immediate release to its owners.We make bold to say that contrary to the allegation of the Nigerian Navy Pathfinder Base, Port Harcourt, Rivers State against MT APECUS, the Vessel was never at any point involved in illegal bunkering activities neither did it involve or made any such attempt to involve herself in any dealings in petroleum products.Importantly, at the point MT APECUS was arrested, no crude oil or petroleum products was found in her, she was completely empty which points to the obvious fact that she was not in Nigerian for any form of illegal deals”, they also wrote.

On the alleged illegal arrest of the Vessel, MT INVICTUS  by the  Nigerian Navy, Pathfinder Base, Port Harcourt, they averred that; “The vessel MT INVICTUS, arrived at Bonny inner anchorage on 1st April 2019, in order to complete substantial repairs of Main Engine turbocharger, due to inability of the Ghanaian technicians to perform and complete the repairs in Ghana, where she was operating there for  almost four  years, based in Tema as home port.

“Owners following the official procedures of Bonny authorities arranged  through their local representatives / agent at  Bonny to obtain all necessary permission and clearances for her entering in the anchorage and the performs of the repairs and supplies. While the vessel arrives at Bonny, an inspection was carried out by Navy gunboat and found same in order clean / empty and dry and she was  allowed to proceed and anchor at inner anchorage where she was idle for about 20 days performing repairs and supplies, without any issue and or any further inspections by the Navy”.

They added;” In the early morning hours of 18th May 2019, precisely at 3:50 hours, 2 Navy gunboats came alongside with an arrested illegal bunkering barge to tie them with MT INVICTUS. The Naval personnel on board MT INVICTUS tied them with the Owner’s vessel, ignoring in total captain’s protests, to whom in fact a force exercised by the gunboat Commander threating him to be arrested, unless he allows the alongside of the barge. The Naval personnel subsequently returned with another arrested illegal wooden boat and they tied it with the first barge they brought at around  5:03 hours of 18th May, 2019 and they disembarked”.

“At  08:08 hours of the same day came another gun boat and  started taking the photos of the illegal barge and wooden boat alongside with MT INVICTUS. It was shortly after this incidence that the vessel MT INVICTUS was arrested and detained by personnel of the Nigerian Navy Pathfinder Base, Port Harcourt, Rivers State.The Nigerian Navy Pathfinder Base, Port Harcourt, Rivers State, alleged that the vessel MT INVICTUS engaged in or attempted to deal petroleum products. The allegation is totally false and does not represent accurate facts as the Vessel was not at any point involved in illegal bunkering activities neither did it involve herself in any dealings in petroleum products”, they pointed out.

They stated categorically that at the time the Vessel MT INVICTUS was arrested, no crude or petroleum products was found in her, adding that, “She was void without any trace of petroleum content or attempt to engage in same which clearly shows that she was not in Nigeria for any form of illegal deals”.

They described the abduction of Mr Charles Maccarthy and the lukewarm disposition of the relevant security agencies as worrisome and most disappointing and, “Worse still, is the obstinate posture of our enforcement agencies to have the 17 crew members and the vessels MT APECUS and MT INVICTUS released.”

“It is against this background that we implore you to use your good office to investigate this matter with a view to arriving at a positive and remarkable outcome”, they wrote.