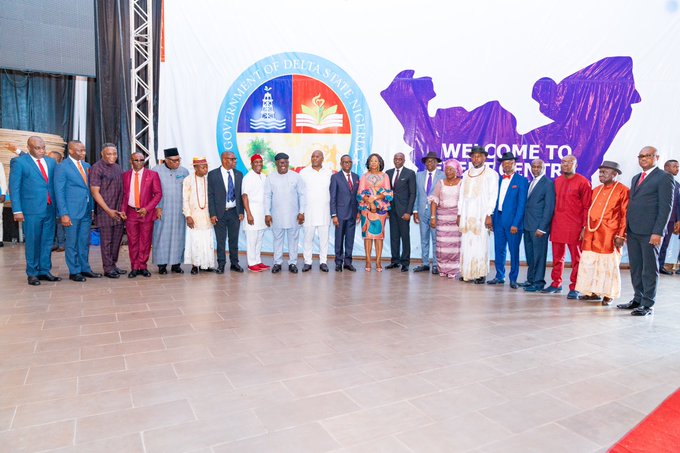 17 Deltans were Tuesday, July 30, 2019 sworn-in as Commissioners at an event where the Delta State Governor, Senator Dr. Ifeanyi Okowa urged political leaders to apply decorum in their utterances to avoid heating up the polity.

The governor who was reacting to a statement credited to a prominent politician who used the media to castigate his administration for not granting his (the politician’s) request to nominate a Commissioner, stated that political leaders are expected to “show some level of decorum in whatever they say or do; because, I am not the kind of man that want to be dragged into arguments with our leaders because I have a lot of respect for them, but when some leaders go off course sometimes, it is important to put things in the right perspective.”

“It is truly unfortunate that one of our leaders has been insulting the office of the governor on the pages of newspapers and on social media; it is very unfortunate that this type of situation took place and I wish that the criticism was based on real facts, but, I do not think that the criticism was on a mistake on my part, because, the fact that a leader makes a request to appoint a commissioner and it is turned down is not enough for such a leader to go to the newspaper or social media to criticize the government of Delta state; more so, when such a leader by all standards and from all available information in the state cannot be said to have contributed enough to say the kind of things that he has said on the newspapers,” the governor said, adding, “only yesterday, my attention was drawn to the fact that he has asked the government to account for the monies we have received in the last four years and I think that Deltans appreciate the much we have done within the limits of the resources we have and I am aware that in Burutu local government alone a lot has been done  and will still be done; just a few weeks ago the Vice President of this nation was in Burutu to commission the Obotobo 1 and Obotobo 2 to Sekebolo to Yokri road which is a 20.76km road for which our people  were happy;  only last year we commissioned the Burutu township roads and I know that the people in Burutu town and the local government area are very happy with the jobs; and I am aware that the road moving from Tuomo to Torugbene is on-going as I speak”.

He continued, “I am aware that we are continuing the bridge in Ayakromo and so many other projects that we are undertaking; so, when such a person from that local government is asking us to give account, I will say that I will want to start to give the account from his local government area and I urge him to tell us what he used his position to do for the people of Burutu.”

“Fellow Deltans, as many of you can imagine, sifting through the long list of potential appointees, most of who are eminently qualified, can be quite exacting and draining and it took weeks of broad-based consultations, geo-political considerations, rigorous scrutiny and quiet contemplation to come up with this second and final list of commissioners,” the governor said, adding, “we may not have satisfied everybody to be honest, and I don’t think we can; but, I dare say the choices largely mirror the wishes and aspirations of a broad spectrum of leaders, relevant stakeholders and the populace in the various local government areas as we did our best to carry everybody along as has been our approach to governance since the first tenure of this administration.”

Governor Okowa who congratulated the 17 Commissioners urged them “not to succumb to such negative emotions as complaining, grumbling and murmuring, as this administration will strive to ensure that all who have laboured in the past and especially during our electioneering campaigns will be rewarded one way or the other, if not by appointment but through some other means and I plead with Deltans to be patient with us as we navigate our way through this process.”

“As a Commissioner, be humble because, being a commissioner does not mean you are better than others; also, it is a call to higher responsibility as you must resist the temptation to look down on others or be brash with those around you, especially your peers and contemporaries; be a unifier because, as a commissioner, you have to rise above petty sentiments and divisive tendencies; it is your mandate and responsibility to rally all together for the sake of unity, progress and you must exercise good judgment, show tenacity of purpose and be willing to stoop to conquer for the greater good of all,” Governor Okowa said at the well attended ceremony.

Responding on behalf of the Commissioners, Sir Fidelis Tilije thanked Governor Okowa for finding them fit to be part of his team to build a stronger Delta State, assuring that they will carry out their functions diligently to the benefits of Deltans and to the glory of God.