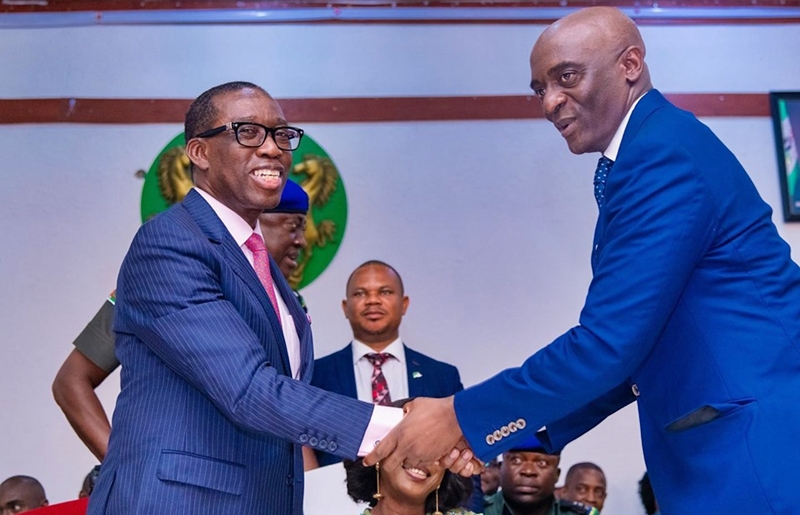 Barely a week into his second term in office, Delta State Governor, Senator Dr Ifeanyi Okowa has sworn-in Mr Chiedu Ebie as the Secretary to the State Government.

At swearing-in ceremony which was attended by prominent Deltans, at the Unity Hall, Asaba, on Monday, June 3, 2019, Governor Okowa warned that those who will work with him as appointees must avoid nepotism and sectionalism.

According to Governor Okowa who spoke shortly after the oath of office was administered on the 11th SSG of Delta State, “sectionalism and nepotism must not have a place in the thoughts, choices and actions of those who will work with me.”

“I want to assure all Deltans that this administration will continue to run an all-inclusive government whether in terms of appointments or projects distribution; we have only just started; Deltans should trust us to do the right thing, and do it we shall and I wish to emphasize that appointments into this administration will be based on merit and geographical spread, not on emotions, sentiments or for the sole purpose of political patronage,” he said.

Governor Okowa continued, “we are in a hurry to get things done and cannot afford to lose precious time; therefore, this is not the time for apprenticeship; we shall be going for men and women, who are conversant with governance, understand our policy direction and require minimal supervision to do their work; it shall be a good combination of youth and experience to ensure that governance goes on seamlessly.”

He specifically urged Mr Ebie to know that as the SSG he should be aware that his office is the engine room of governance by “maintaining an open door policy and as much as possible make yourself available to all and sundry and give every citizen the opportunity to benefit from our programmes because, in doing this, you must be tactful, objective, just, resourceful and calm at all times.” While expressing confidence that Mr Chiedu Ebie will work tirelessly to help his administration deliver on its electioneering promises by reconciling and harmonizing the activities of Ministries, Departments and Agencies of Government for effective policy formulation and implementation, Governor Okowa asserted, “Mr Ebie is a fine gentleman who served meritoriously as Commissioner for Basic and Secondary Education in the first tenure of this administration; his civility, analytical depth, communication skills and diligence are essential qualities needed for the office of the SSG; in addition to these, modern statecraft, with all its complexities and challenges, requires team players, proactive leaders and men with large appetite for work; criteria which I am convinced Mr Ebie is well equipped with to enrich the social, political and economic narrative of our dear State.”

Mr Ebie in his response, thanked God for the successful inauguration of Governor Okowa and his Deputy, Barr. Kingsley Otuaro for a second term, observing that such made it possible for his choice as the Secretary of the State Government.

While thanking Governor Okowa for the opportunity to serve the people as the SSG, he promised to carry out his functions diligently in line with the stronger Delta agenda of Governor Okowa’s administration, stating, “there is still a lot of work to be done.”