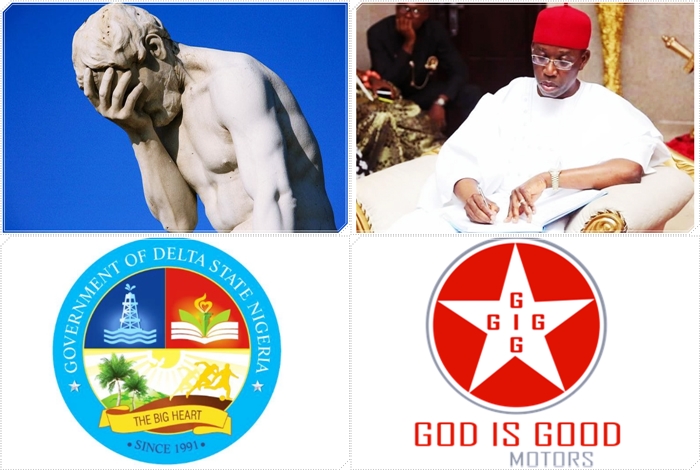 The proverbial saying that ‘a man who sells his father’s house with the thoughts of punishing him, will also not have a roof over his head’, has has finally happened in Delta State.

With overwhelming evidences gathered by Investigative Tabloid, HardReporters, it has been revealed that the State Governor, Ifeanyi Okowa has thrown caution to the wind and sold a whooping 70% stake of Delta State Asset (Delta Transport Services Limited) popularly known as Delta Line to his cronies and 2015 election campaign benefactor, God is Good Motors (GIG Transport Development Company Limited).

The biblical 10% of your increase to God was not even considered in this sacrilege. The gift of Delta Line, the State only transport property to God is Good Motors for N161 million over NLC’s N2 billion bid, is likened to the desperate act of the prodigal son as accounted in Luke 15:11–32 of the Holy scriptures. An action that does no good.

With the nod of Delta State financial buccaneers, the Edo state headquartered transport company is set to illegally inherit the birthright of Deltans. All thanks to the hand of Esau in the far cry bidding and sales process of our dear asset.

Previous governments who were cash crunched and idea starved could not tamper with the landmark asset of Deltans but the current government led by a primus public office holder has in less than 3 years sold the largest chunk of the state’s equity to a front without due recourse to the pains and sufferings of Deltans.

Still mourning the embargo placed on Civil Service employment in the oil rich state with the massive stench of decayed infrastructures and execution of fraud filled projects across the state, the shock of this betrayal to the peace loving people of Delta State, in a large scale has triggered the exit button of the current PDP led government on or before May 2019.

This public display of sharp practices by the present crop of PDP officials, has once more clearly shown that the lowest yearnings of Deltans are not currently on the To Do list of the present administration of Okowa. Thus, reaffirming the trending notion of corruption being an appendage of the Peoples Democratic Party in Nigeria.

If a State Governor can engage in this low level bargain of throwing out a near close Paris refund sum of N2 billion for N161 million for an enviable Asset (Delta Line) spread across the length and breadth of the country, I make bold to say that the interest and welfare of over 4 million Deltans can be sold for a pot of porridge.

Suffice one to say that the present House of Assembly which is an annex of the Governor, will definitely turn a deaf ear to this sacrilege as any attempt to debate on this sad event will spell doom for the initiator of such discussion. Indeed, the rope bound to the neck of a goat, does not allow it know its true owner.

To the beneficiaries of this windfall, bottles of champagne worth over N200 million would had been popped and unprintable words would have been pelted on our dear state in your cocoon but we will never forget.

Deltans have been raped and abused once more by Men wielding sledge political might. The commonwealth of Delta State has been exchanged by Governor Okowa to his cronies for peanuts.