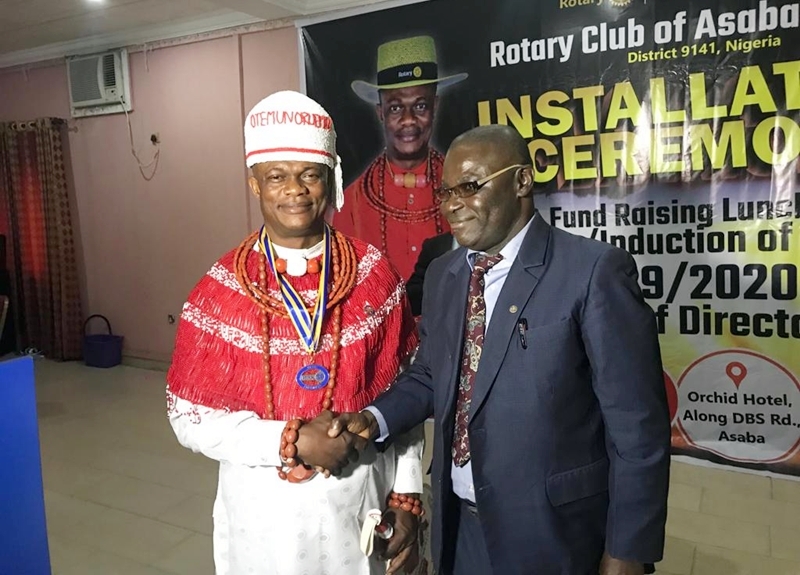 … Promises To Pursue The Core Mandate Of Rotary International.

The first President of the Rotary Club of Asaba Gateway, District 9141 has been installed with a promise to embark on projects that would add values to human lives.

He is Rotarian Aweka Avwenaghagha, a Director in the Delta State Ministry of Oil and Gas and sole candidate of Odukpor Ruling House for the position of Ovie of Idjerhe clan in Ethiope West local government area.

The installation of Rotarian Avwenaghagha which took place on Sunday, September 1, 2019 at Nelrose Hotel Asaba, was performed by the Charter President, Rotarian Adekola Abiodun, supported by the District Governor nominee, Rotarian Andy Uwejeyan, amid cheers from other rotarians, friends, family members and well wishers.

The elated Rotarian Aweka Avwenaghagha, who is the Director of local content and promotion, Delta State Ministry of Oil and Gas and a fellow of the Institute of Chartered Mediators and Conciliator, said he will vigorously pursue the core mandate of Rotary club international which is giving help to the needy in the society.

Rotarian Avwenaghagha who highlighted some projects he intends to embark upon within one Rotary year, appealed to colleagues and well wishers to fellowship with him to actualize the dream, stressing that Rotary is all about rendering selfless services in the society.

He said he will concentrate more on the Rotary foundation of complete eradication of polio in the society which has remained the flagship project of Rotary international.

The District Governor nominee, Rotarian Andy Uwejeyan who also delivered a goodwill message from the Delta State Commissioner, Ministry of Oil and Gas, Chief Emmanuel Amgbaduba, asked all to embrace the work of Rotary clubs as putting smiles on the face of others is a divine responsibility.

Uwejeyan said being a Rotarian made one a global citizen, pointing out the need for privileged members of the society to give to those that do not have.

The Charter President Rotary Club of Asaba Gateway, Rotarian Adekola Abiodun, while handing over to the new President, Rotarian Aweka Avwenaghagha said the club achieved a lot in the last one year and commended members and the mother club for their support.

Others who spoke explained that Rotary clubs have added great values to humanity and made a lot of positive difference in the society and called for more membership.