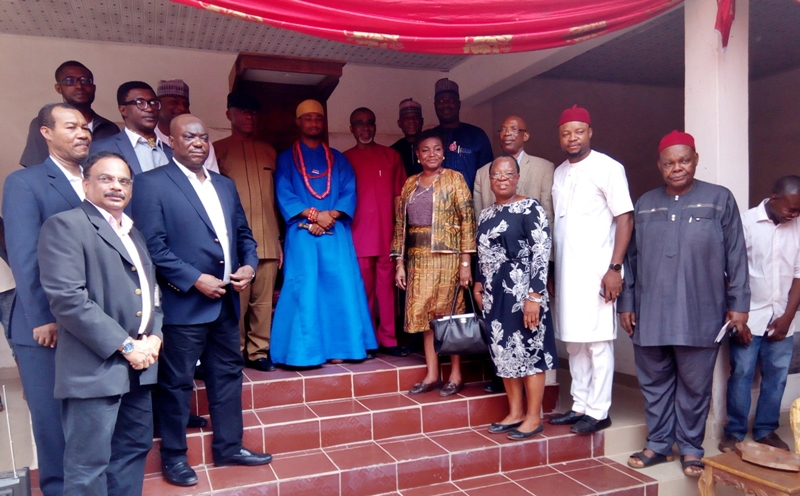 Issele-Uku Monarch Flanked by Members of the Senate Committee on Power alongside Officials of NERC, BEDC and Others

…Assures Community Of Ensuring BEDC Does The Needful Towards Electricity Supply

The Senate Committee on Power, led by Senator Enyinaya Abaribe, today 22nd November, 2019, visited Issele-Uku community in Aniocha North LGA of Delta State, with the management of the National Electricity Regulatory Commission, NERC and of course the management team of Benin Electricity Distribution Company, BEDC as part of its oversight function, using Issele-Uku as a model community in Delta to rate the operations of BEDC as a DISCO.

Senator Enyinaya Abaribe, who was welcomed by the monarch of Issele-Uku, HRM Agbogidi Obi Nduka (MNSE), affirmed that “we are here to do what the law requires of us, which is oversight on the distribution companies, in this case the BEDC. Issele-Uku was chosen as a model, based on what the BEDC MD briefed us they went through as a community to get electrified”.

Believing that Nigeria could be made better, he insisted their job was to review the state of power in respect to distribution companies and then identify areas of challenge and where progress is equally made.

The Senate Committee Chairman was accompanied by Senators James Manager, Suleiman Hunkuyi, Ahmed Ogenbe and Abdullahi Sabi as members who equally reacted from the position of the community that BEDC needs to appreciate the effort and cooperation of Issele-Uku by ensuring that moderate billing system is applied while bearing the burden of procuring and repairing electricity equipment in the town.

The lawmakers commended Issele-Uku community for defying all odds to resuscitate electricity supply and solving distribution challenges through self help. They called on BEDC to be reasonable with the community in the face of scarce electricity commodity, adding that the company must make effort to absorb part of the cost incurred by the community to get electrified.

Meanwhile, speaking from the standpoint of BEDC, the Managing Director, Mrs. Funke Osinbodu agreed with issues raised by Issele-uku community, while appraising their commitment in ensuring that they resume electricity consumption again after over seven years.

Mrs. Funke Osinbodu, Managing Director, BEDC speaking during the Visit of the Senate Committee on Power to Issele-Uku

She therefore averred that what have been noticed are parts of the teething problems of the first phase in the electricity supply process, promising to resolve most of them by the first quarter of next year.

Osinbodu posited that plans were in top gear to fully open shop in Issele-Uku with resident staff covering the area. She commended the community for taking over the job of BEDC in the areas of repairs of lines, fixing of transformers and collection of bills, assuring there would be smooth synergy as both company and community move to the next phase based on agreement.

Earlier, the National President of Issele-Uku Development Union, IDU, Mr. Ugeh Ofordile had spoken on the cordial relationship between Issele-Uku and BEDC, while calling on the company to station their staff in Issele-Uku and do well to fix the vandalised electricity installations in the town.

Prince Ibe Ozoma also challenged BEDC not to use the current billing system as a model, stating that it is expensive and burdensome on the people. He stressed that the community accepted such because they had no choice, suggesting that appropriate pre-paid metering system be introduced and BEDC made to be responsive to its responsibility in order to minimize the suffering of the community.

The highpoint of the visit was when Senator Abaribe and his team officially unveiled the Sienna car donated to the Issele-Uku Electricity Committee to aid their operations, including a hundred thousand naira cash by an illustrious Issele-Uku philanthropist, Prince Ibe Edwin Ozoma.

Hon. Emeka Nwaobi, Others during the Visit of the Senate Committee on Power to Issele-Uku

Abaribe also introduced the Commissioner in charge of Consumer Affairs, NERC, Mr. Moses Arigo who was present; positing that by Electricity Regulation law, every individual house should be metred.