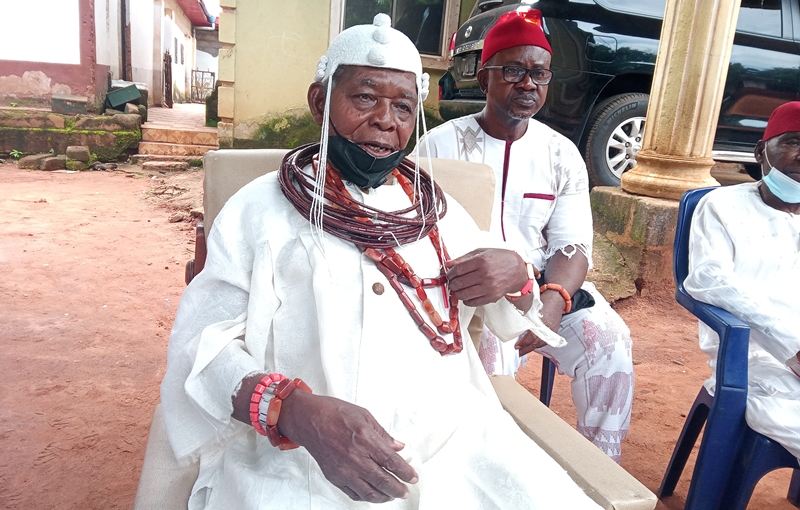 The community through their Traditional Ruler, HRM Obi Francis Jideuwa JP, made this call on behalf of the community during a world press conference, held Thursday, 23rd September, 2021, at Issele-Azagba.

The Obi stated that the movement of Otulu as a community to Aniocha South LGA was politically motivated by the then Secretary to Midwest Government, late Hon. Isaac Okonjo.

Further explanation revealed that the late Isaac Okonjo’s mother hailed from Issele-Azagba and as a way of honouring an achieved son of their daughter, he was given some parcel of land as gift at Otulu area of Issele-Azagba.

This kind gesture of the community would later come back to hunt them as the late Okonjo used his political powers to cede Otulu to Aniocha South where he hailed from paternally and had grassroots political influence.

It was also revealed that even though Otulu was erroneously ceded to Aniocha South, the Supreme Court judgement still recognises the fact that Otulu is a community under the three Isseles – Issele-Uku, Issele-Azagba and Issele-Mkpitime.

This was because, the three Isseles were the ones administering Otulu where they were installing community heads to rule over it, collect levies from the mostly Igbo campers and report back to the Traditional Rulers of Issele-Uku, Issele-Azagba and Issele-Mkpitime. The late Diokpa Okolie Isikekpei and late Chief Ufoegbune from Issele-Uku were the last Odozianis of Otulu before an Issele-Mkpitime man who later joined forces with Ogwashi-Uku community to fight against his people.

According to Obi Jideuwa, “Otulu is part of Issele-Azagba. Our people who lived there and died there were buried there in Otulu.

“In 1990 when we opened Otulu market was the same year we opened that of Issele-Azagba, and the then Military Government at the time was received at Otulu. When we got connected to the National Grid to start enjoying electricity, we extended same to Otulu. We spearheaded the establishment of the primary and secondary schools in Otulu, to the extent that one of the schools was named after our illustrious son, Gabriel Ugonwanne. Our closest neighbours are Akwukwu-Igbo, Ubulu-Okiti, Okpanam and not even Ogwashi-Uku.

“I have heard that Obi of Ogwashi-Uku went to Otulu to perform whether prayers or rituals; an information which I still believed to be rumour. We are peaceful people, we don’t engage in violence. We will follow our course procedurally, because the cases relating to this issue are in court.

“Our reason for calling this press conference is to let the public know what is going on and to reiterate that Otulu belongs to Issele-Azagba. We are also backing the letter that Aniocha North Council had written to Delta State Government, demanding a return of Otulu to Aniocha North, its original root. The gazette creating Otulu as a camp was domiciled in the name of the three Isseles.

“I recall that when this issue of ownership of Otulu started, a Boundary Adjustment Panel headed by one Mbanefo was set up, we were invited with Ogwashi-Uku people. We prepared our own documents, went there and made our submission but Ogwashi-Uku refused to turn up. May be this would have resolved the issue, but it is obvious there is more to this than meets the eye”, Obi Jideuwa submitted.

However, many Traditional observers have queried the rationale behind the crave of the Okonjo Royal Family of Ogwashi-Uku in annexing communities and lands when in actual sense they had not been able to keep their community together.

Those who spoke on conditions of anonymity, said they were shocked when it was alleged that the young Obi of Ogwashi-Uku survived cultists attacks in a post personally shared by his elder sister and WTO DG, Dr. Ngozi Okonjo-Iweala. (Breaking: “Okonjo Ngozi-Iweala’s Brother Obi of Ogwashi-Uku Survives Cultists Attacks in Delta State”, reported by NaijaNewsAgency.Com).

They further queried the motive behind visiting a camp dominated by Igbo farmers in a period of harsh insecurity to perform a rite that cannot be sanely interpreted.

Meanwhile, efforts to speak with either the Iyase of Ogwashi-Uku, Chief Collins Afowa or any of the community’s prominent chiefs to either counter or confirm the claims of Issele-Azagba people proved abortive before press