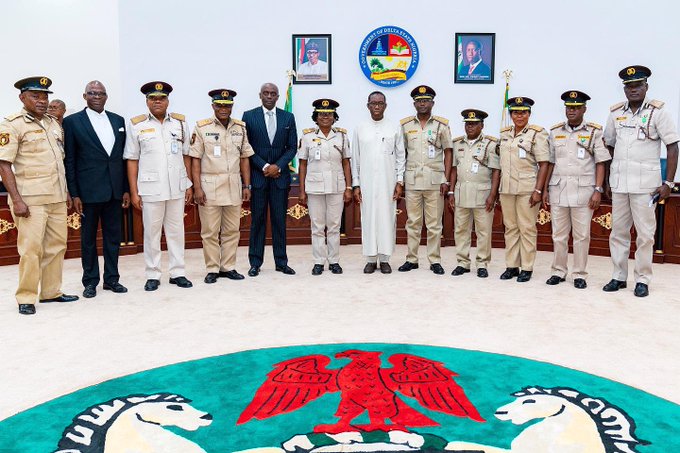 Delta State Governor, Senator Dr. Ifeanyi Okowa has thrown his weight behind the documentation of immigrants, saying such will ensure proper planning and assist in the security of lives and property of Nigerians.

Speaking when the Comptroller-General of the Nigeria Immigration Service (NIS), Mr. Mohammad Babandede paid him a courtesy call on Tuesday, July 23, 2019 in Asaba, the governor observed that it was important for appropriate reforms to be taken for the benefits of Nigerians and the country.

“It is very important both for security purposes and for our population plan for foreigners to be documented because, without appropriate documentation it can impact negatively on the planning for the nation when it comes to taking care of our people, so, without the right account of our people, our resources will become depleted and planning will be affected drastically,” Governor Okowa said.

He emphasized, “we must congratulate you (NIS) on the immigrant reform; I think it is important for us as a nation because you find out that people from other countries just come into our country and settle in any part of the nation; they are not documented in any manner and that is not good for a nation because if they commit crimes, they cannot be traced and it is important that even without people committing crime, we should have documentations of foreigners in our country.”

The governor commended the NIS for initiating landmark reforms, stating, “I am very excited to be briefed on some of these projects that you have embarked on especially on the issue concerning e-passport which will be tied down to national identity; it is something that is very innovative, something that I believe can really help us in national security, because, people bearing all manner of names and people with more than one passport will surely become a thing of the past; so, we want to thank you for thinking about this thoroughly and bringing up this reform.”

Governor Okowa assured NIS of his administration’s continual support as they are rendering vital services to Deltans and Nigerians in general.

Mr. Babandede has said he was in Delta State to commission some projects and commended Governor Okowa for his administration’s numerous support for NIS.