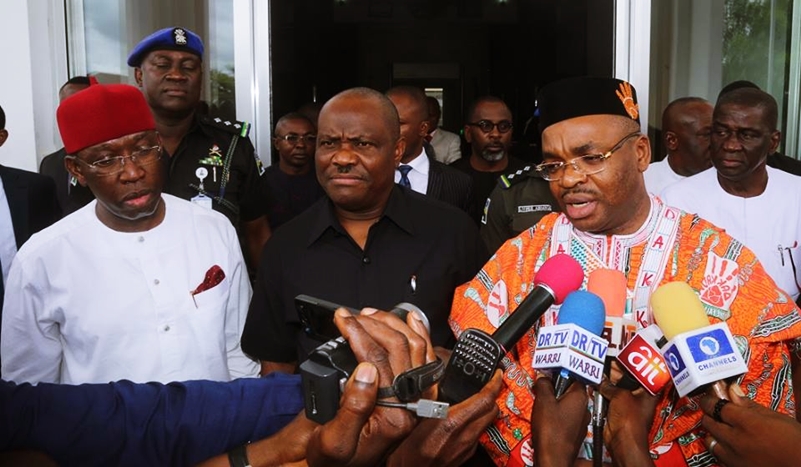 The pride of the South South region of Nigeria, BRACED Commission which has been abandoned since inception of the present administration, is gradually getting a ray of hope as the Governors of Delta, Rivers and Akwa Ibom States have resolved to work for the interest of the region.

The trio, Ifeanyi Okowa, Nyesom Wike and Emmanuel Udom who met in Asaba on Monday, September 11, 2017, after a closed-door meeting stated that, the priority of their meeting was in the interest of the nation and to boost economic activities in the South South region, stressing that it is important that the area is peaceful for economic growth.

Briefing the press after the meeting which took place at the Government House, Asaba, Governor Udom of Akwa Ibom State who was flanked by his colleagues disclosed that security of the region and the revival of the BRACED (Bayelsa, Rivers, Akwa Ibom, Cross Rivers, Edo, Delta) Commission were the main issues discussed at the meeting.

According to him, “we are principally here to discuss economic issues as it affects the region; on behalf of our colleagues in the South South states, we met to see how we can revive the BRACED Commission and boost security in the region.”

“There is the need for us to ensure that the area is safe, with the increase in the quantum of oil production, there is need to boost security in the region, in the interest of our region and the country,” he said.

He emphasised, “mainly, we looked at economic issues, how to revive the BRACED Commission and the issue of security in the region.”