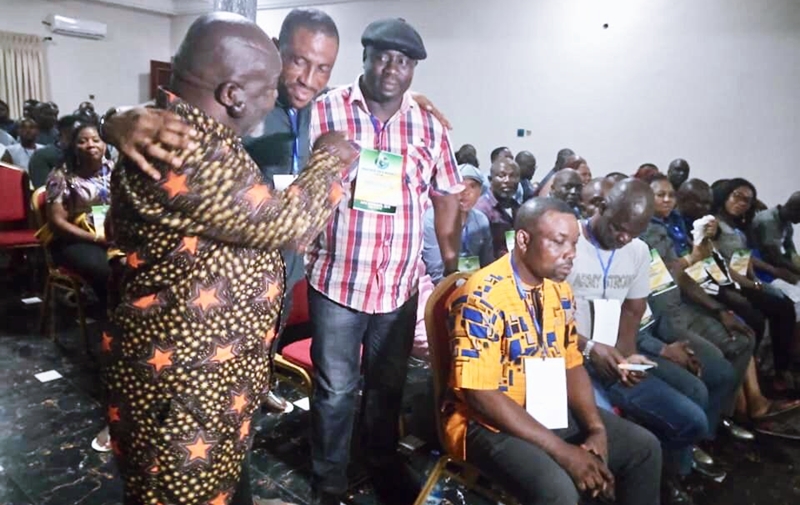 The National President of Niger Delta Youth Movement (NDYM), Comrade Joe Jackson has been re-elected alongside other new executive to pilot the affairs of the group for another four-year tenure.

NDYM is the apex umbrella youth body for all other youth groups in the Niger Delta Region.

Jackson and other officials of the body were elected at the national convention held on Sunday 24th November in Owerri, the Imo State capital.

Comrade Joe Jackson of Akwa-Ibom State polled a total of 59 votes out of a total number of 90 votes cast to defeat Comr. Boboye Peretu from Bayelsa State to emerge President-elect of the Movement.

In another election for the position of Secretary, Comrade. Joshua Osawuyi Ediagbovo polled a total of 51 votes to defeat Comrade Honesty Asemota who polled 39 votes from a total of 90 votes.

Announcing the result of the election, Comrade Kingsley Okere, the Chairman of the Electoral Committee who also doubled as the Returning Officer stated that NDYM has once again demonstrated why it is truly the oldest and pacesetting pan-Niger Delta group through its peaceful and successful conduct of the elections.

He said that “the heavy security presence at the venue is not the reason this election was hitch-free. It is violence free due to the integrity of the electoral process which delegates and observers have all adjudged to be the most transparent in the history of youth politics in the region”

Also speaking to this medium shortly after the elections, Comr. Monoyo Edon, the Secretary of the National Interim Management Committee/Electoral Committee, said: “This is a delegates’ election. 10 Delegates were drawn from the nine states of the Niger Delta and were led to participate in the elections by their chairmen.” We set out from the beginning to make this election as easy and transparent as possible and that we have achieved today.”

Past Leaders and Elders of the Movement who observed the exercise which spilled into the wee hours of Monday, November 25 advised other youth groups to emulate NDYM by ensuring that the process of electing or selecting their leaders are transparent.

Chief Felix Ogbonna, Chief Brookings and Okuku Aniekan Saaforo who spoke on behalf of the Elders Council expressed satisfaction in the electoral process and confidence in the newly-elected executive to build on the gains of the Interim/Electoral committee in repositioning the Movement.

Other executive positions were filled by candidates from the nine states of the region and were all returned unopposed.