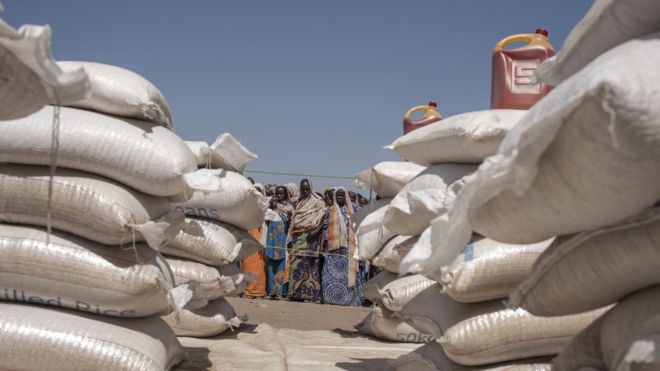 They were jailed for two years and fined One million Naira each after being found guilty by the State High Court in Maiduguri of selling 180 bags of rice donated by an international aid agency,

Details of the conviction was contained in a statement released by the Anti-Graft Agency and signed by its Head of Media & Publicity, Wilson Uwujaren.

“The Economic and Financial Crimes Commission, EFCC, on Thursday, May 4, 2017 secured the conviction of a Supervisory Councillor from Mafa Local Government Area, Umar Ibrahim and one Bulama Ali Zangebe, who were prosecuted before Justice F. Umaru of the State High Court Maiduguri on a 4-count charge bordering on conspiracy to sell and misappropriate the proceed of rice meant for internally displaced persons (IDPs) in Mafa Local Government.

Ibrahim was arrested alongside Zangebe and Modu Bulama, for allegedly diverting 180 bags of rice donated by Danish Refugee Council (DRC), a Non Governmental Organization, for victims of insurgency in Mafa Local Government,

In his Judgment, Justice Umar held that “The EFCC proved its case beyond reasonable doubt as there was an agreement to do illegal act. The convicts conspired to do illegal act to sell rice meant for the IDPs”.

He therefore sentenced both convicts to two years and a fine of N1m each on the charge of criminal misappropriation and two years in prison for conspiracy. The N50,000 recovered from the agents that sold the rice was ordered forfeited to the Borno State Government”.

Count two of the charge read:

“That you, UMAR IBRAHIM and one SHETTIMA LAWAN MAINA (now at large) sometime in November, 2016 at Maiduguri, Borno State within the jurisdiction of this Honourable Court dishonestly converted to your personal use the sum of N1,440,000.00 (one million, four hundred and forty thousand naira) only, being the proceeds from the sales of 180 bags of rice meant for Internally Displaced Persons (IDPs) of Mafa Local Government Area of Borno State contrary to and punishable under Sections 308 and 309 of the Penal Code Law Cap 345, Laws of the Northern States of Nigeria respectively”.

ALSO READ:  Delta 2023: Oborevwori Calls for Calm Over Court Judgement, Sets for Appeal
For advert placement, publication of news content, articles, videos or any other news worthy materials on this Website, kindly send mail to asabametro@gmail.com.
Continue Reading
Advertisement
You may also like...