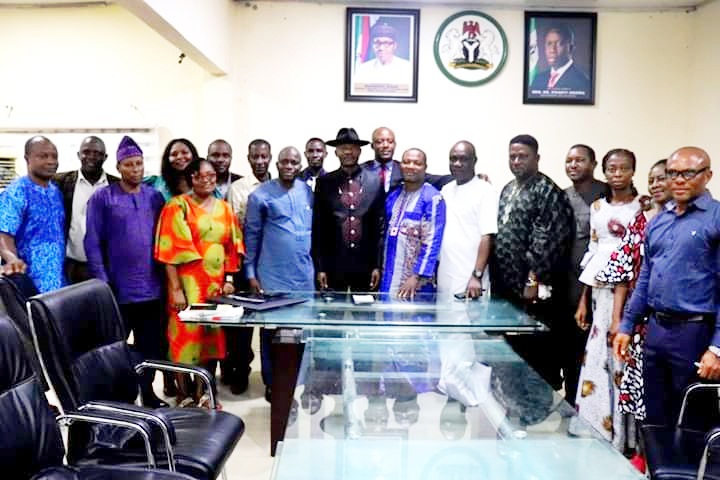 …Describes Him As Man Of Destiny.

The 1993 graduates of Mass Communication otherwise known as Class of ’93 from the Federal Polytechnic Auchi, have paid courtesy visit on the new Delta State Commissioner of Information, Mr. Charles Ehiedu Aniagwu to felicitate with him on his elevation from the Chief Press Secretary to the Governor of Delta State to Commissioner.

The delegation of not less than 20 persons from that set, was led by Pastor Joseph Ikupa, a senior lecturer with the Delta State Polytechnic Ozoro and incidentally the Class Representative of that 1993 Class.

According to him, “We are here to show our solidarity with one of our own, Charles Aniagwu who graduated from the same set with us and now Commissioner of Information by God’s grace. We are also using this medium, not only to officially congratulate him, but to appreciate Governor Ifeanyi Okowa for finding our colleague fit, worthy and qualified to be in his cabinet.”

“It is a thing of joy to note that Charles Aniagwu served as CPS to the Governor in Okowa’s first term, and now elevated to the position of Commissioner in Okowa’s second term. It’s a good testimony that he performed excellently to merit this astounding elevation.”

“I must testify that products of Auchi Poly are always good, resilient, diligent and dogged in their chosen careers and in any endeavour they find themselves. And Aniagwu, being a man of destiny exemplifies that impeccable training from this foremost and renowned citadel of learning”, Ikupa submitted.

The group equally reeled out their activities since they connected with each other and started fraternizing. Some of such activities are rendering help to those who were sick among them, registering the body with the CAC and putting progressive plans in place to uplift some of the facilities at the Mass Communication Department of Auchi Poly.

Responding, the Honourable Commissioner appreciated his alma mata for the visit, pledging not to take such visit for granted.

He equally reeled out the policy thrust of his Ministry, stating that his primary function is to market his principal and the State to the outside world.

However, he assured that Governor Okowa was more than ever determined to do more in his second term with regards to development of physical infrastructure and progressive uplifting of capacity of Deltans to remain economically strong and stable.

Aniagwu nonetheless, assured his old school friends of his collaboration to ensure the memories of the good old days were sustained, while also promising to collaborate with the group to give back to Auchi Poly as an alumni group.

“We must look in the direction of our friends who are not comfortably privileged now, by finding ways to bring them on track. Granted that those of us here are Deltans, we must work in synergy to support the success of this Governor Okowa led administration.”

Meanwhile, the Commissioner’s course mates made a presentation to really register their presence.

Those on ground with the Commissioner to receive his classmates were the Functioning Permanent Secretary, Chief Paul Osahor JP, Special Assistant to the Governor on Media, Mr. Nelson Egware,  DBS Warri correspondent and Commissioner’s classmate, Mr. Nkem Nwaeke and others too numerous to mention.