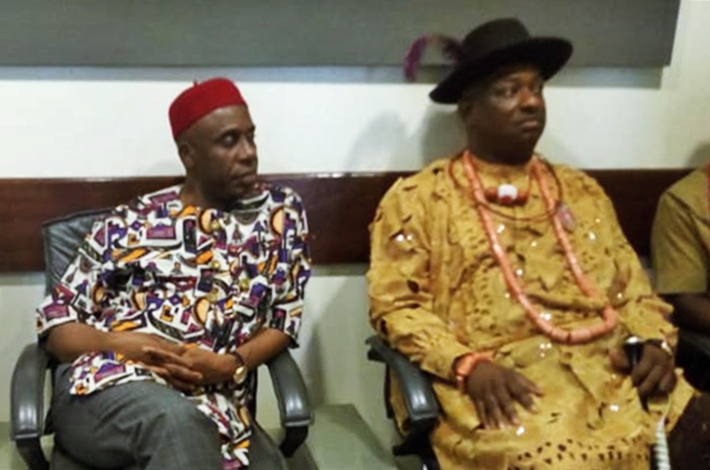 Deltans received with utter consternation the news of the visit of Rt. Hon. Rotimi Ameachi to Delta State for an empowerment scheme under what was tagged “National Directorate of Employment (NDE) Empowerment Programme” which can be best described as a 21st century political scam.

Many Deltans who were railroaded into the venue of the event are bewildered to see desperation taking too far by Rotimi Ameachi and his co-traveler junior Minister of State in the ministry of labour and productivity, Olorogun Festus Keyamo, SAN, playing on the sensibilities of Deltans who left the venue of the kangaroo event in shame and regrets upon discovery, that they have been once again scammed by men who ought to be honourable in their actions.

Most bizarre is the fact that, no one was in the real sense empowered either with cash, starter business packs nor machineries thereby giving credence to the assumption of a broad daylight scam by the promoters.

Deltans are at crossroads as to why Rotimi Ameachi who has failed woefully to provide leadership in his home State of Rivers would suddenly come to Delta State to fool members of the APC with his deceitful empowerment programme hurriedly packaged for him by his surrogate minister colleague and host.

Deltans are aware of Rotimi Ameachi’s 2023 Presidential ambition but bemused at the manner with which he intends to float his political tall dream under a deceitful outing.

Deltans are also aware of Ameachi’s plots for the second time, to flout a factional party structure in the State same way he did in the past before their humiliating defeat in the courts and the collapse of his Rivers State chapter of the party that led to the APC not fielding a single candidate in the 2019 elections.

Deltans cannot be hoodwinked by political skulduggery and Ameachi should be told not to use Delta State as a lunch-pad for his 2023 Presidential race rather, he should fashion out ways to resolve the protracted political crisis in his home State of Rivers.

There is this common adage that states; “charity begins at home” for a man who suddenly appeared in Delta State as a saint and an empowerment czar and coincidentally preaching party unity to have failed woefully to tackle his State’s party chapter crisis, is the highest height of deceit.

They further questioned the real intentions behind an organized empowerment programme without the actual empowerment of a single individual.

Tongues have also been wagging why Ameachi would want to annex Delta State as part of his political empire using deceit? who does he want to fool with his pre-arranged window dressing being referred to as “empowerment programme”?

Party leaders and stakeholders are further miffed by the fact that millions of tax payers money have been voted into this misadventure through the purchase of phantom equipment in the name of empowerment programme that never took place after all, prompting the call on the EFCC and ICPC to open an investigation into this rehearsed economic crime.

Stakeholders have put forth a few questions that should be answered to wit; when and where did the beneficiaries of the phantom empowerment programme trained in Delta State to have informed the issuance of starter packs equipment? Isn’t it shocking also to hear that those who were earmarked to be beneficiaries of this deceit, are themselves not aware?

Worthy of note is a critical segment of the party as represented by the ward Chairmen and their executives who were not even aware of the kangaroo empowerment programme that would have benefitted them yet, the duo of Ameachi and Keyamo were pictured addressing a gathering where nothing was distributed as publicized to hoodwink party loyalist and Deltans in general.

Deltans have now become wiser and will not be fooled by men who are driven by personal and desperate ambitions aimed at achieving their selfish goals to the detriment of the suffering masses within and outside the APC.

Dr. Okolocha Azubogu, is a member of the APC and a political analyst, writing from Illah.