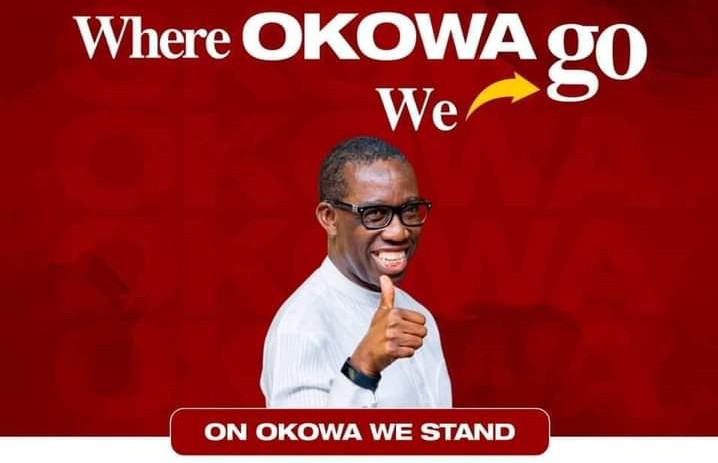 The vibes from a rally of the Delta Peoples Vanguard on Saturday, January 15, suggests a death knell for democracy, particularly for the Peoples Democratic Party in Delta State.

Curiously, the event was held at the Government Field, Agbor, the very door mouth of the Delta State Governor, Senator Dr Ifeanyi Okowa, and apparently by his instigation and sponsorship.

The rally had this one tag: “On Okowa we stand.” The meaning is that only Okowa can decide for the PDP who will be its flag bearer for the 2023 Governorship election.

Before they came to the public, various party leaders had been sent to subtly threaten members in the wards and cells not to identify with the aspiration of any aspirant until the Governor reveals whom he wants to succeed him.

The implication of this aberration is grave not only for the PDP in Delta State, for democracy in Nigeria but as well for the whole concepts of party membership and adult suffrage.

Conceding a monopoly of power to one person to decide for the whole of the party represents the lowest ebb of democratic civilisation for which the Delta PDP, perhaps Delta State as a whole, can never recover from, for it tips the party into the realms of despotism and tyranny and enmasculates the whole party members, organs, elders and leaders from contributing in its affairs.

It is sad that this anomaly is even being driven by the condescension and complicity of those who should know better to protect the party and the tenets of democracy from such bullish tendency which, if allowed to stay, there will be no end to impunity, unilateralism and arbitrariness in the life of the party and the state.

In fact, the spiral into the districts, local governments and wards can only be retrogressive.

The terrible irony is that him for whom the door was forced open by the people to emerge is now the one closing the door in the face of all and seizing the key. This is a sad commentary on human nature.

It is common knowledge that when former Governor Emmanual Uduaghan attempted to unilaterally foist a candidate on the party in 2015, the party elders, officials and leaders stood against such arbitrariness and came together to defend that fundamental tenet of democracy, the freedom of the people to choose.

The beneficiary was Okowa himself. What then has changed now for Okowa to insist on being the only one to decide who succeeds him? Is it the Machiavellian axiom of power corrupting and corrupting absolutely?

The grace of the PDP to win elections in Delta may be taken for granted but when high-handedness advances towards totalitarianism, the consequences can be grave.

The strength of the Delta PDP had always been in mutual respect by leaders for the rights and privileges of one another. Therefore, for one man to now want to constitute himself as the Alpha and Omega simply introduces poison into the system.

Okowa has enjoyed all rights and privileges of the party since 1999. Who now is he fighting? What does he want? To become the only power of the party?

He did say, himself, that it is only God that can pick a leader and, as they say, the voice of the people is the voice of God. For him to now aggregate himself to the totality of the people and the party and to want to be the only and exclusive voice in deciding who gets the PDP ticket is therefore tantamount to playing God. The real God is watching.