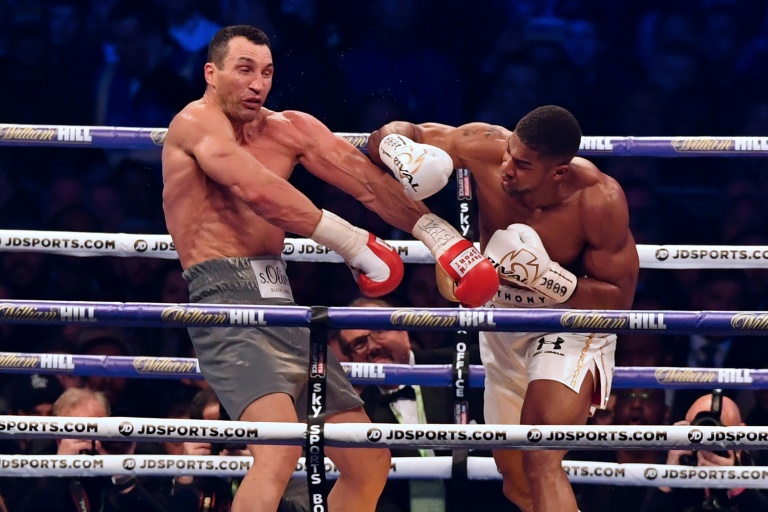 Nigerian-born Anthony Oluwafemi Olaseni Joshua delivered one of the great nights in British boxing history by stopping Ukrainian Wladimir Klitschko in the 11th round to be crowned IBF, WBA and IBO world heavyweight champion.

He staged the feat in front of 90,000 fans at Wembley Stadium on Saturday.

In a wildly exciting fight, which swung one way and then the other, Joshua sealed victory during a thunderous 11th round.

“I don’t mind fighting him again, if he wants the rematch,” Joshua said at a press conference after the fight in front of 90,00 fans at Wembley Stadium.

“Big respect to Wladimir for challenging the young lions of the division.

Klitschko, 41, refused to make any commitment on his future and whether he would retire after a second successive defeat.

“I have a rematch clause in the contract which I can execute. Right now I will not announce anything.

“I don’t feel like someone who lost. Even though I didn’t get the belts, I definitely gained although I lost.”

Klitschko suffered his first stoppage defeat since 2004 when he was overwhelmed by Joshua’s precision and power in a ferocious 11th-round assault.

But Klitschko showed there is still plenty of fight left in him.

Joshua had lost control of the epic encounter after flooring the Ukrainian in the fifth and appeared to have punched himself out.

Klitschko landed a right to the temple in the sixth round which dropped Joshua for the first knockdown of his professional career.

“I thought he would not get up,” said Klitschko. “I thought I could have done more to finish him after he went down. I was pretty sure it was going to be my night so I took my time.”

Joshua, the 2012 Olympic gold medallist, became subdued as Klitschko, who won the Olympic title in 1996, clawed his way back into the fight until the Briton unloaded a series of combinations to seal victory.

“I took a round off to get my breath back and then I said: ‘You’re in a bad place’,” Joshua recalled.

“I tried to recover and then step it up in the later rounds, that was the plan.

“I learned I can knock out anyone. Sometimes you have to ride a few shots and take a few shots before pushing on for victory.”

Joshua was born in Watford to a Nigerian mother and a British father of Nigerian and Irish descent. He made his professional debut in 2013.

Joshua grew up for some of his early years in Ijebu-Ode Nigeria and returned to the UK halfway through Year Seven to join Kings Langley Secondary School.

Joshua’s powerful right uppercuts featured in all three of the knockdowns but the fight was close at the time of the stoppage: one judge had it 95-93 to Klitschko, while the other two scored it 96-93, 95-93 for Joshua.