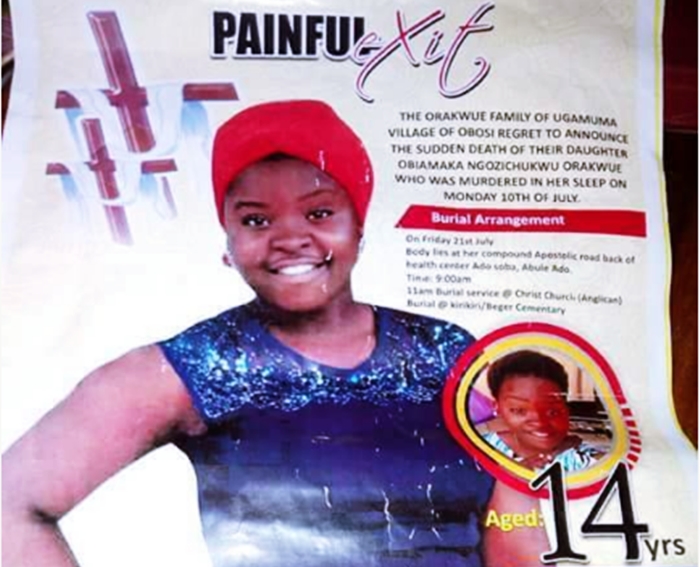 According to Anambra Online, This sad incident occurred in Abule Ado area of Lagos state where some hoodlums raped an innocent girl to death.

The victim Obiamaka Orakwue hails from Obosi in Anambra State and met her untimely death while at home in Lagos for the holidays.

According to residents living in the area, where the ugly incident occurred, some unidentified teenage boys speaking the yoruba dialect were seen smoking Indian Hemp at the back of the house where the deceased lived with her parents.

One of the residents said that they saw them scaling the fence of the compound from the inside and when he tried to confront them, they took to their heels.

A call was placed to the parents of the girl since she was the only one at home and the mother had to rush back home early from work almost immediately after she got the call only to meet Obiamaka gasping for breath with blood gushing out of her private part.

She was rushed to the hospital where she was pronounced dead.

On a condolence visit to the family, a distraught Mrs Orakwue who could not be consoled narrated what transpired.

“I was at work when i got a call from our neighbor that they saw some boys jumping out from the fence of our compound and that my daughter was not responding to the knock on the gate since it was locked from inside. I was worried because my daughter was the only one at home and her other siblings were on holidays at my elder brothers place in Lekki

On getting to the house, I opened the gate with my spare key and dashed into the room only to find my daughter gasping for breath in the pool of her blood.” I asked her what happened and all she could mutter was, “Mummy…those boys i told you about”…,

When asked about the (boys), Mrs Orakwue who burst into tears said that her daughter complained about some boys who had made advances towards her when she came back on holidays from school just recently but she rebuffed them and they swore to teach her a lesson.

“It must have been the same boys that took advantage of the fact that I and my husband went to work and gained entry into the compound through the back fence of the house where they attacked my daughter” she said amidst tears.

The father of the deceased Mr Obinna Orakwue who could not hide his emotions lamented that enough was not being done to find out those behind the demise of his daughter.

“We have reported the incident to the police and they promised to apprehend the culprits but we still have not heard from them till date.”

He described Obiamaka as a very brilliant girl who came out with flying colours in her just concluded exams.

“She was meant to be in JSS 3 by the next academic session. We told her to join her siblings in my in-law’s house but she insisted she wanted to stay at home to help with the house chores especially since i and my wife were away at work.

Now see what has happened. I leave it in the hands of God to judge”, he said.

Obiamaka Ngozichukwu Orakwue was laid to rest on the (Friday) 21st of July 2017 at the Berger Cemetery.

May her Soul Rest in Peace and the monsters who did this to her not go unpunished.