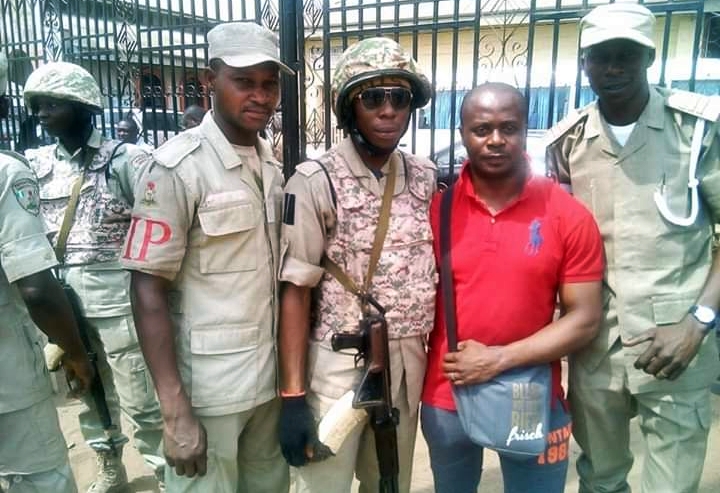 Following series of international media reports in 2017 exposing the prevalence of Human Trafficking in sub-saharan Africa especially in Nigeria, the Federal Government and other relevant bodies stepped up its fight against traffickers in order to nip the root cause of illegal migration which had put the country in bad light.

The attempts made by the President Muhammadu Buhari’s led administration so far with international bodies in this direction, had seen Nigeria slip up from a Tier 2 Watchlist country in 2017 to a Tier 2 country according to the U.S. State Department’s Trafficking In Persons Report for the first quarter of 2019.

However, the numerous policies and efforts employed in this rescue mission, have left in trail, loss of lives, destruction of properties and sustained threat to lives of some of the masked and unmasked security officers and advocates who had put their lives at risk to eliminate this scourge.

Mr. Uwam Patrick Emeka, an Immigration Officer was detailed to investigate the illegal activities of some human traffickers operating within Edo and Delta States axis of Nigeria.

Mr Uwam Patrick Emeka, on Red Shirt with some of his colleagues

In a covert investigation which he undertook discreetly under several aliases across the hottest bases of human trafficking in Nigeria (Prime Locations Withheld), revealed a systemic chain of syndicates who rely on the aid of senior officers of the Nigeria Immigration Service to perpetuate their criminal acts.

In a chat with from his undisclosed location, Mr Emeka stated that, “I carried out the investigation and discovered that the human trafficking syndicates have insiders within the security apparatchik, particularly the Immigration Service officers who assist them to acquire Nigerian passport and also help them in crossing the borders to Libya and Mali from where they are shipped to Europe.”

He exposed further that the traffickers also employed the services of some highly placed Nigeria Police Officers who they pay to cover up their nefarious activities and erase any form of prosecution.

Following the end of his undercover investigation in July 2018, Emeka became a target of death for the organized crime groups which had informants and agents scattered round the various agencies of Government. The threat which followed his discovery, has jeopardized his career and put his life at risk as attempts to relate the information he got with anti-trafficking bodies, have pitched him against these syndicates. He has been facing series of threats and persecutions since September 2018.

In his words, “After my findings I prepared my report and recommended that the office investigate some of our officers who assist these people. I also recommended that they notify the Police authorities. After submitting my report, some persons within my office intercepted the report and instead of doing the needful, they sold me out to the syndicates who are now after me.”

“They have launched series of attacks on me using both thugs and even Police officers to enforce my silence. They finally attacked my home in December 2018 few days to Christmas knowing that I might be around for the festive season. They destroyed my car and left me for dead before I managed to escape. I have been in hiding since January and nobody actually knows my whereabouts at the moment. I have forsaken my dear family, avoiding any close contact with any of them”, Emeka lamented over the phone.

Traumatized and disappointed at the level of hostility which greeted his selfless service to the country, Emeka muttered that he is aware that he has been declared a wanted person and there is now an ongoing manhunt for him from across the country due to the damaging information he posses.

“I’m well known in my office and in my 13 months undercover assignment, I had interacted with so many dreaded traffickers whom I thought will be behind bars few months after the investigation. I was really exposed and the syndicates are out to see me dead so that the government will never find out what I discovered. They have insiders in top government offices; Immigration, Police and even the military. I don’t know who to trust, I had to run for my dear life. They even ambushed my only brother who they so brutalised till he finally gave up the ghost in the hospital. I took my only son into hiding and made away out of the country. I am still young and active, I don’t want to loose my life in my prime, hence my choice of safety to a more secured and trusted location.”

Attempts to speak with colleagues of Mr. Uwam Patrick Emeka at his Office to find out the exact situation, were futile as no Officer wished to speak to the Press on the matter. However, attitudes portrayed by his colleagues at the mention of his name, revealed that a lot is being swept under the carpet by both the Immigration and Police authorities.

The fight against Human Trafficking and its conspirators, is far from being won in Nigeria as the lives of Men and Women in the media, security and advocacy sectors are constantly threatened to force them to silence. The unlucky ones have lost their lives in the line of duty while others have fled the shores of this country of which Mr. Uwam Patrick Emeka is one amongst hundreds.