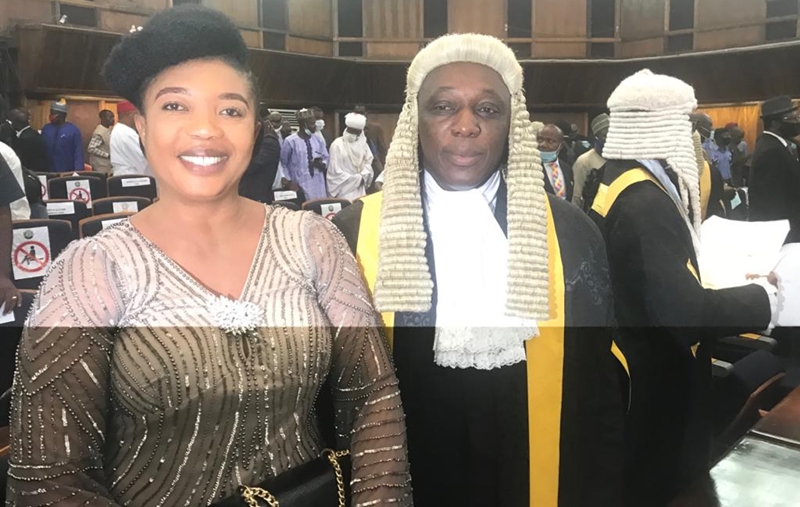 One of the actors in the gossip mill of the failed marriage of the immediate past Attorney General of Delta State, Peter Mrakpor SAN and Spouse, Joan Onyeamaechi, DG Delta State Capital Territory Development Agency, has been finally confirmed in an official statement.

This information was made public in a release by Akpovoke Otiti, Media Aide to Dr. Peter Adogbejire Mrakpor SAN, on Monday, August 9, 2021, adding that, the report of a pregnancy tied to the former AG was false and an attempt to tarnish his image.

The statement as obtained by this medium reads. “THE Attention of Dr. Peter Adogbejire Mrakpor SAN, has been drawn to publications on Facebook and other social media platforms about a purported Pregnacy /Child delivery for him by a member of the Ugbah Family of Ubulu Uku alleged to be a sister/Cousin/maid to Hon. Joan Onyeamaechi Mrakpor (nee Ugbah).

Dr. Peter Adogbejire Mrakpor SAN, wishes to inform all concerned that the said allegation is totally false and satanic agenda to destroy his hard – earned reputation as no person is pregnant for him or has a child for him as falsely alleged by a desperate group of disgruntled politicians and enemies.

It is pertinent to state that the marriage between Dr. Peter Adogbejire Mrakpor SAN and Honourable Joan Onyeamachi Mrakpor (nee Ugbah) broke down finally since July 2020 due to irreconcilable behavioral pattern.

Dr. Peter Adogbejire Mrakpor SAN has instructed his solicitor to commence legal proceedings agaimst any further publications about such evil allegation and to formally dissolve the said failed marriage.”

Mrakpor SAN, who has been an integral part of Governor Okowa’s government since 2015, was among those recently dropped out of the State Executive Council.

He has also been reportedly seen scheming for the 2023 gubernatorial ticket under the umbrella of the Peoples Democratic Party, PDP.