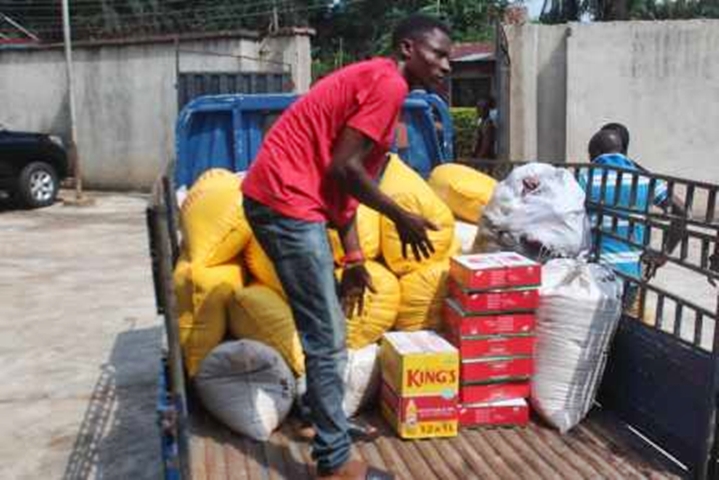 Over 300 tons of food items, to be provided as lockdown palliatives by the Minority Leader of the House of Representatives, Hon. Ndudi Elumelu, for residents of his Aniocha/Oshimili Federal Constituency has arrived Delta State and distribution is already in progress.

The items which were offloaded at the central distribution station at Onicha-Uku in Aniocha North Local Government area of the State, under the watchful supervision of the crack monitoring team set up by the minority leader, arrived in about 15 articulated trucks on Monday 7th April, 2020 and included; 600 bags of rice, 750 bags of beans, 500 bags of garri, 600 bags of onions, 500 cartons of tin tomatoes and 500 cartons of groundnut oil.

Distribution of the food items commenced on Tuesday, April 8, with representatives of the four Local Government areas in the Federal Constituency, led by their Council Chairmen, coming to collect their own area allocations and according to the distribution list, consignments were provided for the four LGAs, to be shared through each community’s President-Generals across party lines while another batch was made available for designated orphanage homes.

Christian Association of Nigeria (CAN) in the Four Local Government Areas, the Hausa community, traditional rulers and security agencies within Aniocha/Oshimili Federal Constituency were also provided for in the Minority Leader’s palliative gesture.

Explaining the modalities for the distribution, a leader in the Federal Constituency, Chief Nkem Okwuofu appealed to the representatives from the four local Government areas to ensure that the food items gets to the targeted recipients, saying that widows, the physically challenged, indigents and those who earn daily living, as well as the unemployed population in the various communities, should be their main focus.

Clarifying the instruction of the Minority leader further, Chief Okwuofu noted that they are engaging recognized persons who are close to the people such as councillors, the PGs of the communities, Community Youth Leaders, representatives from the palace and indeed any person identified to be close to the people at the community level, irrespective of party affiliations, for the distribution of the items at the various communities in the Federal Constituency.

Chief Okwuofu who is the Chairman of the Delta State Civil Service Commission, lauded the gesture of Hon. Ndudi Elumulu in providing food items as palliatives for his constituents, describing him as a representative who is always thinking good of his people all the time, including at critical times such as this period of Covid-19 Lockdown.

“This whole thing came up and caught the people unawares and he came out immediately to palliate their sufferings. I don’t think such people will forget him.

“By the grace of God Hon. Ndudi Elumelu is blessed and he is using his blessing to bless others. I think its a rare feat and he has set an example for so many other persons and I do hope that others should take example from him and always remember those who are less privileged.

“The prayers of the less privileged, the widows and all, go a long way in people’s lives and so I want to thank him again and pray that the Almighty God will continue to replenished him,” Chief Okwuofu stated.

She also appealed to the people of the State in general to remain indoors during the period of the lockdown, saying that it is not by any means a punishment or punitive measure, but a proactive directive put in place by the Delta State Governor, Senator Dr. Ifeanyi Okowa to keep the people safe from the deadly Corona virus and contain the spread of the Covid-19 pandemic.

The notable Political and community leader then commended the State Governor for his proactive and sincere management of the pandemic in the state and affirmed that he is a Governor and a leader that has the interest of the people at heart.