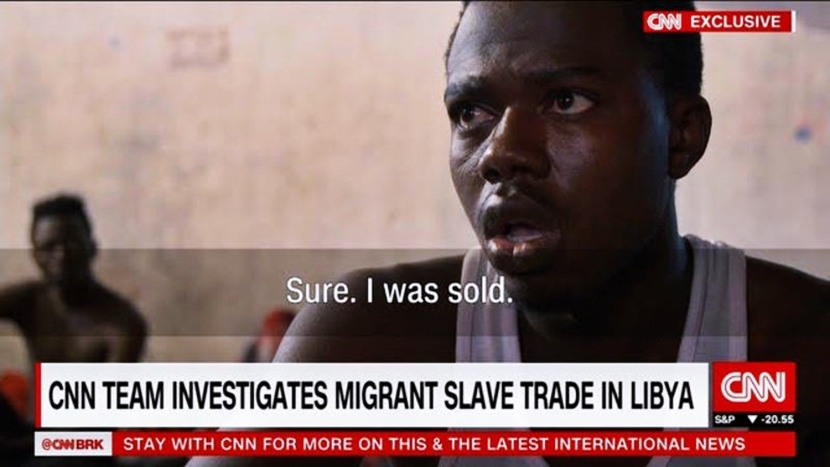 About a fortnight ago, specifically on the 15th of November, US broadcaster, Cable News Network, CNN began airing a series exposing what it called the slave trade in Libya. In the intriguing videos, African migrants from the sub-Saharan countries of Nigeria, Cameroon, Zambia, Ghana etc. who are on illegal migration to Europe via Libya, are captured, tortured and sold off as slaves or have their organs harvested by their captors.

The videos were so graphic, dramatic and heart wrenching. But does the documentary have any political purpose to serve?  How sincere is the CNN in this reportage? Could the CNN be on another mission to destabilize a nation?

These concerns can be seen in the response of Tripoli to this unfolding development.

There is a strong basis to believe that the CNN documentary could have been stage managed or at best exaggerated, being a part of a larger design by the West to hit at the center and disorganize as well as provoke an international assault against the resurgent Government in Libya. The larger implications will be to weaken the bond of African unity, trust, brotherhood and solidarity.

Ever since the US and NATO forces ousted Libyan leader, Maumer Gadhafi, the nation has been in turmoil. But this fits perfectly  into the plans of the Western invaders as a rudderless Libya, became a licence to plunder the vast oil and gas resources of Libya. This has been ongoing since the fall of Gadhafi until very recent times when the Libyan government seems to be showing signs of stability and independence.

The intention of the CNN and their NATO paymasters is to paint a horrific picture of Libya and impress it upon the world that the government in Tripoli is weak, failed, callous and complicit in human right abuses. Indeed, the purported slave trading will be blamed on the government in order to justify a military invasion of the country.

This tactic was the same used to invade Iraq in the guise of searching for non-existent weapons of mass destruction. This was also the abracadabra that led to the 2011 military crackdown that toppled Gadhafi. The list is endless.

What this CNN documentary could also be out to achieve is to stir resentment and angst by African nations against Tripoli. It is the deliberate act to set African nations against themselves. Chinua Achebe, in his book Things Fall Apart stated this old trick thus; The white man has put a knife on the things that held us together, and we have fallen apart.

NATO and indeed the West can only pretend to love Africans as long as oil and diamonds are involved. These war mongers begin by using the CNN, their discredited ally who by subtle propaganda and media blitzkrieg such as in the present case masquerade with human rights issues. No wonder why President Donald Trump has succinctly described the CNN as the “purveyor of fake news”. Indeed, this will not be the first time that CNN reports will turn out false. The prediction of the 2016 victory of Hilary Clinton is just a case in point.

The footage in the documentary would suggest that same was a movie scripted, acted and directed for the CNN cameras. The notorious mafia and militia reported by the CNN as having control of large swathe of territory were almost as good as Hollywood stars in their performance and the alleged captives were full of drama. This is definitely too dramatic to be real. The CNN is only doing what it is reputed for, thinking that by so doing, it could rake up what is left of its credibility.

This documentary bears all the trappings of international politics, the art of which the CNN has mastered. Even as the Libyan government embarks on the enquiry to verify the claims in the CNN documentary, the investigation ought to commence with the CNN itself as sweet smell can not emanate from rotten corpse.

After Delta Line, Okowa Set to Sell Government Houses in Ibadan
Who is Afraid of Atiku Abubakar?
Advertisement