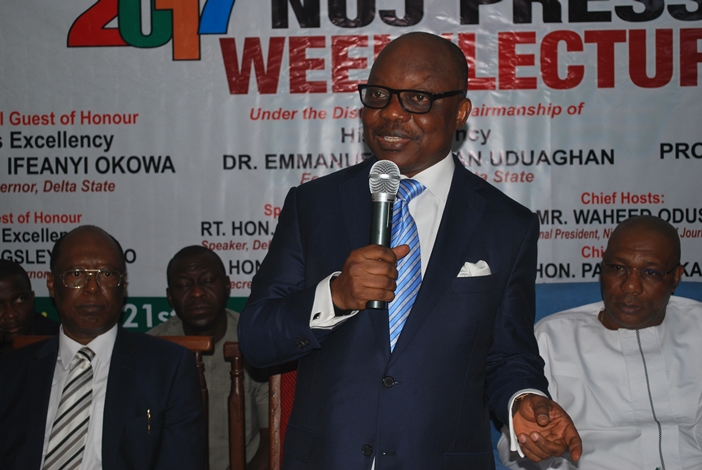 The immediate past Governor of Delta State, Dr. Emmanuel Eweta Uduaghan, has likened Online Blackmailers as social media terrorists and called on relevant authorities to check mate this rising trend.

The former governor made this statement at the 2017 Press Week of the Nigeria Union of Journalists (NUJ), Delta State Council which held on Tuesday, 21st February, 2017 at Labour House, Asaba.

Dr. Uduaghan who was the Chairman of the programme decried this ugly trend of Social Media Blackmailing which has now over-ridden the traditional information dissemination process and become a business for fraudsters and money hunters.

“Desperate whistle blowers and blackmailers now rely on social media to peddle their trade. Journalists should try to curtail these excesses by carrying out proper investigative journalism to avoid reproducing this false information to the Public.”

“Blackmailers can promote security challenges and Government should try to subdue their activities”, he added.

Making his remarks on the theme of the event, ‘GOOD GOVERNANCE, JOURNALISTS AND SOCIAL MEDIA”, Uduaghan stated that ugly stories have now overtaken the bad and good stories in the social media.

He queried that information should always be verified before publication because the after effect could be devastating when false messages are passed to the public.

“Social media is fast but the speed can be devastating. An instance was when the present Governor went to the House of Assembly to deliver a speech and social media hawkers swiftly sold a false information quoting that the past government has indebted the state to the tune of 700 Billion Naira. Even with the numerous press briefings and reconstructive follow ups, the initial figure sent out is yet to be corrected to the handed over debt figure.”

Dr. Uduaghan however, eulogized the importance of the social media in governance, stating that the outbreak of social media has made government officials to be extremely careful.

“Social media has also been effective in Governance, like Donald Trump who uses Twitter to propagate his ideology and correct dissenting information from other sources.”

He added that Good Governance can be achieved through the actions of Journalists and social media.

In his keynote address, the guest speaker of the programme, former Governor of Edo state, his Excellency, Prof. Oserheriemen Osunbor, charged journalists to always use social media in the best interest of all rather than engage in inciting the public.

The Press Week event was well attended by journalists in the State. Some journalists who distinguished themselves were given awards and deserving government officials were also presented with awards.