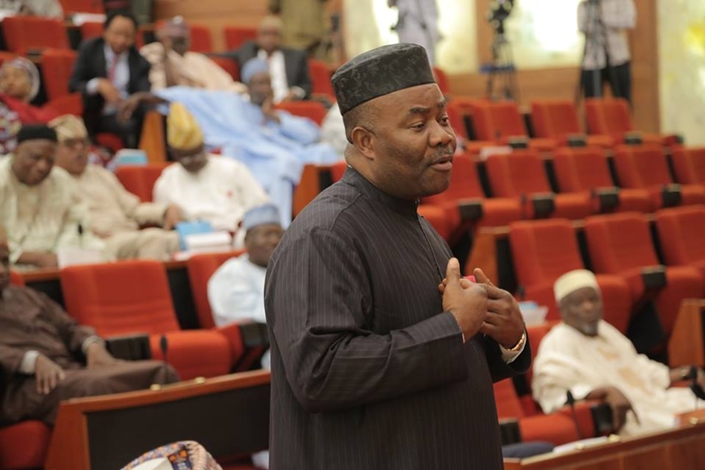 The Senator representing Anambra South Senatorial zone under the platform of the Peoples Democratic Party (PDP), Andy Uba, has formally defected to the All Progressives Congress (APC).

Senate President, Bukola Saraki announced the defection of Senator Andy Uba from the PDP to the APC during Tuesday’s plenary.

Recall that Uba had first disclosed his defection at a news briefing in his home country, Uga, Aguata Local Government Area of the state on February 1.

He said, “This decision was arrived at after due consultation and engagement with my family, constituency and legal team.

“As a senator of the Federal Republic of Nigeria, I also sought relief from the same Constitution.

“I rely on Section 681 (g), which has also been tested in the Supreme Court.

“By this communication, I declare that I am now a card-carrying member of the All Progressives Congress.

“I am committed to working with you and your party on how to unite, build our policies and take the vision of our party to our great country.”

According to him, APC has ideology and focus which he needed to tap into to provide quality representation to his constituents.

Uba further said that he joined the APC because of other personalities in the party with sound ideas and whom he looked up to in politics.

He listed some of the personalities to include the Minister of Labour and Employment, Sen. Chris Ngige, and APC National Auditor, Chief George Muoghalu. Uba stressed that with such caliber of people, the party would take the state to enviable heights.

Akpabio made this known at plenary on Tuesday under Order 45 of the Senate Standing Order and said that the PDP would reclaim Uba’s committee appointment in the Senate from him.

He said, “That position belongs to the PDP; we have a notice of our intention to go to court to reclaim that seat. It is to let you know that the party is not in dispute.’’

Akpabio called on the Senate to declare Uba’s position as Chairman, Committee on Public Accounts, vacant in view of the defection.

He said that upper chamber should, at the next plenary, announce a new chairman for the committee.

Uba had at plenary announced his defection to APC and pledged commitment to his new party’s resolve and determination to reposition the economy.

The lawmaker’s defection has increased the number of APC senators in the Red Chamber to 65 and reduced PDP to 42, while Labour Party has one member.