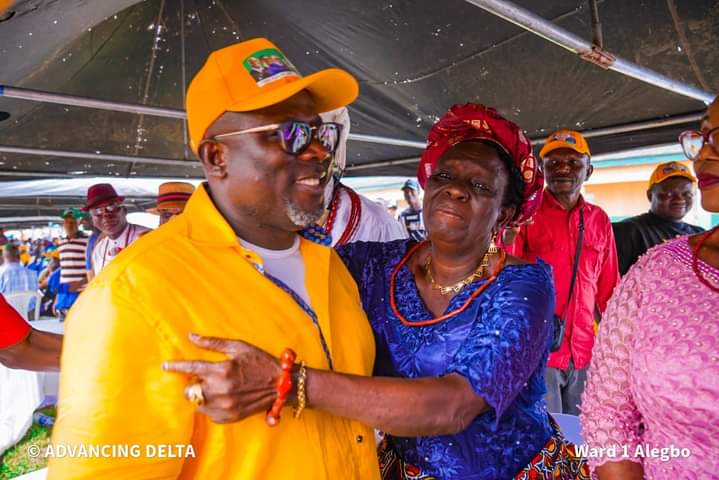 Sheriff Oborevwori at the PDP Ward to Ward Campaigns

The history of politics is replete with the struggle of classes. Even from Biblical times, the taller, more handsome children of Jesse wondered how Samuel would seek out a goat herder to anoint as future King instead of them. It was also subsequently asked, “Is Saul also among the prophets?”

In the New Testament, the Pharisees, Sadducees and Scribes also thought little of Jesus Christ, wondering how any good could come from Nazareth. In the pride of their high learnings, they were ignorant that power belongs to God, that the race is not for the swiftest nor the battle for the strongest, that God elevates the humble and uses the simple to confound the mighty.

It was such that Jesus who was born in the corner of a manger (call it dog cage) became the King of the world. That same divinity seems to define the forthcoming Gubernatorial contest in Delta State.

The main protagonist, Rt. Honourable Sheriff Francis Oborevwori, humble, calm, and resilient, is a homeboy. His antagonists feel he does not belong to the tribe of the “mighty,” sons of some old high-profile persons who, by the privilege of their birth and parentage, feel that power is exclusively for them and never for the sons and daughters of the common folks. Herein is the contest in Delta.

Sheriff, as he accepts to be freely called, is not a descendant of any mighty name. He struggled to be in the mention by dint of self-effort. He has no home in Abuja, he does not holiday in London, New York nor Dubai.

He has aptly described his greatest asset as “street credibility,” taking pride in his deep connection with the common folks and everyday people.

While the high-class dash off to foreign cities for weekends and public holidays, he steps out from the Chambers of the Delta State House of Assembly, where he has been the Speaker for five years plus, to be with his family in his Osubi home or go round to honour his relations and friends distributed across Aniocha, Oshimili, Ika, Ndokwa, Ukwuani, Itsekiri, Isoko, Ijaw, and his native Urhoboland, identifying in solidarity with them in their different joyful moments or difficult circumstances.

His opponents suggest that such a humble lifestyle is not psychedelic enough for one aspiring to be a Governor of Delta State, but beyond his simplicity is an entrapment of some of the greatest qualities of truly great leadership which begins with empathy, the identification, association and communication with the people – knowing them, feeling them, sharing in their pains and helping to solve their needs.

It is for this quality that he has been sustained as the longest speaker of the State Assembly and elevated from the position of Treasurer to Deputy Chairman of the Conference of Speakers of State Legislatures of Nigeria till date.

Before now, State Assemblies have been led as war houses, with the mis-impression that they must not agree with the executive arm in order not to be seen as “rubber stamp.” Sometimes also, some of the Assemblymen see warmongering as a pivot to rocket their political popularity.

Oborevwori however defines the principle of separation of powers as the Division of Labour in which all arms of Government must work in harmonious understanding for the common purpose of social and economic development of the people.

In his view, law-making and oversight functions do not necessarily mean the antagonism of the executive arm. He has conducted the State Assembly with the maturity and wisdom that differences are better managed through communication and agreeable resolutions, without the dramatics of conflicts and showmanship of populism.

Having come through the mills of public service, starting first as Supervisory Councillor for Works in the old Okpe Local Government Area which included now Udu and Uvwie Local Governments, Special Assistant on Youth Development to Governor James Ibori, Special Adviser on Land Security to Governor Emmanual Uduaghan, Delta State Coordinator of the Presidential Amnesty Programme and then elected and re-elected Speaker of the State House of Assembly, in 2017 and 2019, he understands the responsibility of governance and the sobriety required in the discharge of leadership.

His experience through those positions, especially working with three successive Governors of the State and particularly as Speaker, not only bequeaths him with a deep knowledge of the development issues across all constituencies of the state, where and how the shoe pinches the people, but also of the processes and procedures of good governance.

To enhance his efficiency as a legislator, he also studied for a Certificate in Legislative Framework for Budgeting Management at the Georgia Institute of Technology and another in Legislative Management and Leadership at the International Law Institute, Washington DC.

He is a member of the Nigerian Institute of Management (Chartered), but even most assuring is that he is also a Fellow of the Institute of Chartered Mediators and Conciliators, a necessary skill for good governance through the equitable distribution of resources for not only even development but also for the maintenance of social harmony, peace, and security, especially in a state of diverse ethnic nationalities like Delta.

This much he has reflected in his M.O.R.E. Agenda which, in practical terms, focuses on the industrialisation of the state by capitalising on its rich oil and gas resources to activate various existing and new industrial parks, attract private sector investments through enablement policies, tailored support for investors and Public Private Partnerships; jobs and wealth creation through human capital development, entailing skills training and empowerment in technical handiwork, ICT and Digital knowledge as well as support for Small and Medium Enterprises; improved food security and expansion of agribusiness value chains through more meaningful funding, technological and innovative support for farmers for higher commercial productivity, processing, packaging, marketing, distribution and exports as well as risk management; and the diversification of the economic base by encouraging the development and growth of diverse sectors, including the creative industry.

His MORE Agenda also includes the expansion of the state’s physical infrastructure base, especially roads, bridges, jetties, as well as the deepening of social assets in health, education, housing and motivation of the state labour force.

In public acceptance, conviction and followership, Oborevwori is far ahead of his opponents but, as expected in politics, they are throwing things at him to distract him and confuse the public about his personality, personal achievements and contributions to state building.

They even argue that he does not speak Queen’s English, being not born in Buckingham but Osubi, being not bred in London nor New York but in Alaka of Uvwie, being not a graduate of Oxford but of Ambrose Alli and Delta State Universities.

But, the more they try, the more the State intensifies in “Sheriffication” as is currently being witnessed by the ever-increasing enthusiasm building around him in the ongoing ward-to-ward campaign by which he reaches and touches the people across the grassroots.

The glaring indication is that the people have not only settled for the homely leadership they find in him, one that they truly, confidently and easily reach and connect with, but also one that inspires hope in the common folks across the Delta, from the upland to the riverine, from the inner parts of the urban and suburban centres to the towns, villages and hamlets, from the artisan to the civil servant, the farmer to the market woman, the taxi driver and bus conductor to the cleaner, from the primary or secondary school teacher to the university lecturer and from the undergraduate to the youth on the street, that they and their sons and daughters can also have a place in leadership and governance, if they build themselves like Sheriff.

APC, Tinubu, Omo-Agege and the Voyage to Nowhere
DELTA 2023: Sheriff Oborevwori and The New Deal
Advertisement