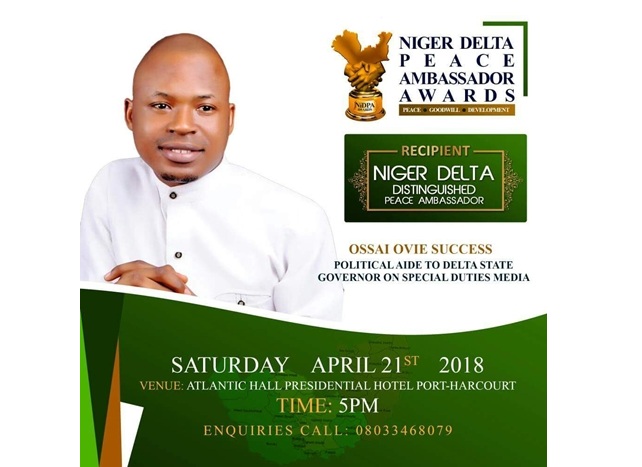 The award will be handed to the recipient during the 2018 edition of the Niger Delta peace summit which will be hosted by the River state government on Saturday, April 21.

Ossai who was appointed by the Delta State Governor, Sen. Dr. Ifeanyi Okowa at the age of 23 and ever since, he has distinguished himself by contributing positively to humanity and has been honoured with several Awards by different Non Governmental body.

The award also recognises the work of the awardees in the struggle against abuse of human rights in the region.

Others to receive the award include the late Nigerian nationalist Isaac Adaka (aka Boro) who will be hounoured posthumously. Also, late Ken Saro-Wiwa, Kenule Beeson, a Nigerian writer, television producer, environmental activist, and winner of the Right Livelihood Award and the Goldman Environmental Prize will be honoured.

Speaking on the summit, Chris Odey, an environmentalist said the individuals are chosen as recipients of the 2018 Niger Delta Peace Ambassador Awards as an affirmation of their efforts in bringing equality and for peace building.

Odey said that some of the individuals died for having the courage to challenge the federal government to duly give back to the communities where over 80% of the nation’s wealth is generated from.

He said: “We have seen our parents shed tears of sorrow when they could not farm nor fish again due to crude oil discovery, but at same time we have seen individuals we now call Heroes of Peace stood up and said enough is enough, our voices must be heard. We cannot say Uhuru yet, but we also have reasons to be hopeful, because we have won court cases in our favour.

“Niger Delta Peace Ambassador Awards is more than just a plaque and frame, it is a celebration of oneness, an honour worthy of the receivers, as it is expected to bring together sons and daughters of the Niger Delta, from Bayelsa to Akwa Ibom, Abia to Ondo and connecting Delta, Edo, Cross River, Imo and Rivers states,” Odey noted.

It was gathered that the award recipients will cut across all individual and organisation who have demonstrated unprecedented effort in ensuring a safe and peaceful environment in the region.