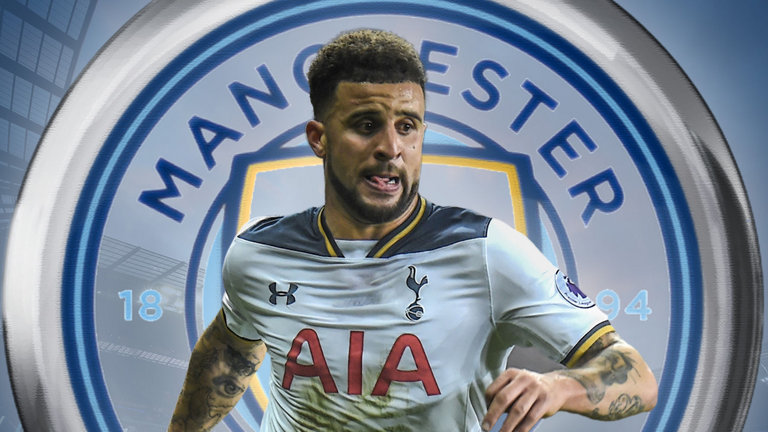 Kyle Walker is set to become the world’s most expensive defender on Friday with Manchester City prepared to spend up to £54 million ($70mn, 61mn euros) for the out of favour Tottenham player.

The 27-year-old England international, who joined Spurs alongside Kyle Naughton in 2009 for £9mn from Sheffield United, will cost an initial £45mn with another £5mn due in a year’s time and £4mn due in add-ons, according to The Times.

That would break the record £50mn paid by Paris Saint-Germain to Chelsea for Brazilian defender David Luiz in 2014, while eclipsing the £49mn forked out by City to Liverpool for Raheem Sterling in 2015, the most for an English player.

He established himself as the first choice right-back at Spurs under Mauricio Pochettino, but their relationship deteriorated towards the end of last season.

Kieran Trippier was selected ahead of Walker in both the FA Cup semi-final against Chelsea and then in the north London derby with Arsenal the following week.

Walker’s arrival will be expensive consolation for Guardiola after missing out on veteran Brazilian defender Dani Alves, who snubbed his former Barcelona boss to join PSG on a free transfer following his departure from Juventus.

Guardiola failed to win a trophy as a manager for the first time last season, admitting that at a bigger club like Barcelona or Bayern Munich he could have faced the sack.

Guardiola will not be done with flexing the financial muscle of the Abu Dhabi-owned club as he is also keen to lure Monaco defender Benjamin Mendy for £40mn.

The 22-year-old French international left back will complete Guardiola’s expensive rebuilding of his defence having let experienced full-backs Pablo Zabaleta, Bacary Sagna and Gael Clichy leave at the end of last season.

Should he succeed in signing both Walker and Mendy it would take his close-season spending to over £168mn. Monaco’s Portuguese midfielder Bernardo Silva and Benfica goalkeeper Ederson joined last month for a total of £78mn.

Guardiola has still to resolve the future of England goalkeeper Joe Hart, although it looks like he will join West Ham on loan with City paying a substantial amount of his wages.

Former French international Samir Nasri is another player Guardiola is looking to offload after sending the 30-year-old out on loan to Spanish side Sevilla last season.