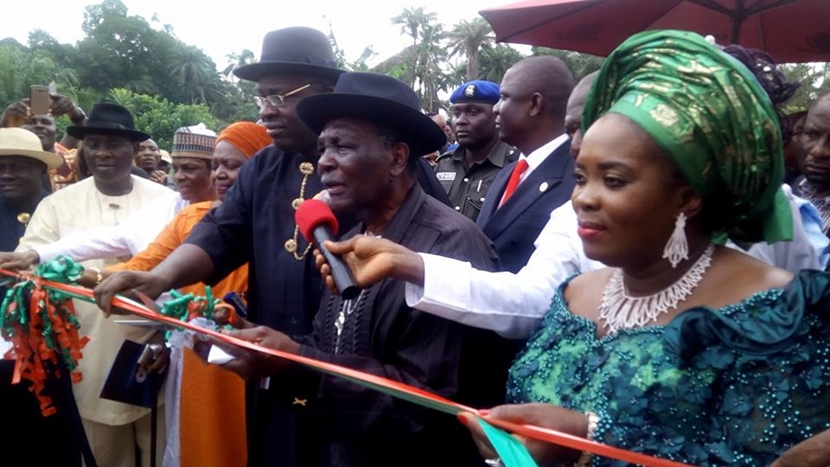 Former Head of State, Gen. Yakubu Gowon on Thursday, July 13, 2017 said Governor Seriake Dickson’s revolutionary approach to educational development would turn around the fortunes of Bayelsa State in the near future.

Gowon stated this at the commissioning ceremony of the Ijaw National Academy at Kaiama, during which Governor Dickson presented a cheque of N97 million to the State Education Development Trust Fund Board.

He described the facilities at the Academy as impressive, adding that the vision behind the setting up of the free boarding secondary school is commendable as it is designed to achieve academic excellence and capacity building.

While charging the students to make optimal use of the scholarship programme and protect the facilities provided for them, he expressed optimism that they would be among other Nigerians that would take the country to greater heights in the foreseeable future.

Presenting the cheque, Governor Dickson explained that, in addition to the N100 million recently released to the Trust Fund, government deducted N97 million from the salaries of both political appointees and civil servants for the month of June, 2017 including the 5% contribution from the State monthly internally generated revenue.

The Governor said he was proud of his achievements in the education sector, noting that it was under his leadership that boarding schools were established and funded by the state government, 20 years after the creation of Bayelsa to nurture and build a crop of future leaders for the Ijaw nation and the country as a whole.

Dickson who used the opportunity to name the access road linking the Academy to the East-West Road after Late Prof. Kay Williamson in recognition of her contribution to the development of Ijaw language and culture, stated that other key facilities would be used to immortalise eminent sons and daughters of Ijaw land.

In his remarks, Ijaw National Leader, Chief Edwin Clark attributed the lack of development in Ijaw land to the absence of educational institutions in the area and therefore called on the people to support the free education policy and programmes of the Dickson’s administration regardless of their political differences.

He commended the Governor for his wisdom in using education to fight poverty and underdevelopment, expressing optimism that the Academy would achieve its set objective of producing quality students for higher institutions of learning both within and outside the country.

A representative of Kaiama Community, Chief Ekpein Appah and a member of the House of Representatives, Hon Douye Diri expressed gratitude to the Governor for carrying the people of Kolokuma/Opokuma Local Government along in the scheme of things, adding that no government has been so kind to the area as the present administration.

The highlights of the ceremony were the tour around facilities in the school and presentation of a portrait of the Former Head of State designed by an SS1 student of the Ijaw National Academy, Master Ebidoumene Godsfavour.