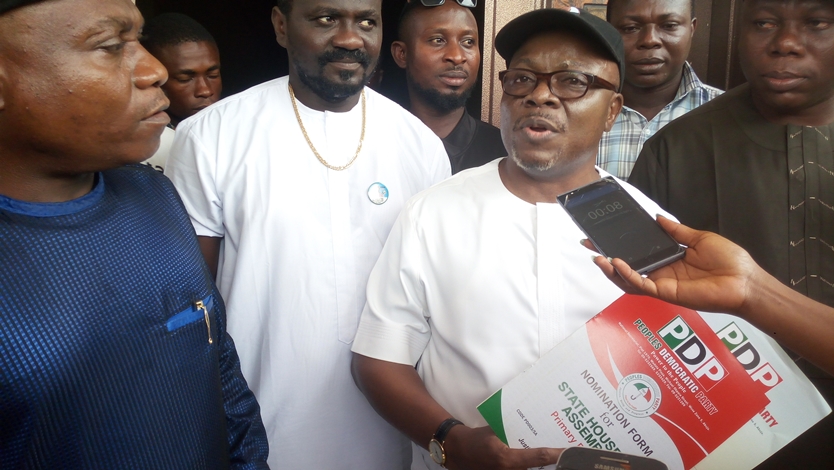 Mike Ogwah Speaking to Journalists After Picking up His Nomination Form

Members of IPF who besieged the residence of the aspirant in their thousands, surprised Mr. Ogwah with a cash gift of N600,000.00 which is the nomination fee as required by PDP guidelines.

In an elated mood, Hon. Mike Ogwah commended IPF for the great show of love in their financial support and coming out en masse to witness the collection of his nomination form.

“I sincerely want to appreciate IPF for this gesture, I am indeed very happy for making this funds available for the collection of the form, it gives me more courage that I am accepted.”

“This group has identified themselves from the beginning of the consultations till today. They have not left me and coming out today to provide the money for the form shows that everybody is committed to the success of the project.

“I want to promise everybody here and not just IPF but the whole Isoko north constituency, that this project is their project and not my project. It is for the benefit of everybody in Isoko North Constituency.” Former Local Government Chairman, Hon. Emmanuel Edevor who spoke on behalf of Mike Ogwah 2019 Campaign organization, commended the effort of the group describing it as a step in the right direction.

He assured the group and Isoko North constituents of Ogwah’s commitment to the welfare and development of the people.

While speaking to journalists after picking up his nomination form at the state secretariat of the party, Ogwah encouraged PDP delegates to elect popular candidates who will contest the main election, “somebody that can deliver them and that can bring the dividends of democracy to the people,” he harped.

He reaffirmed that the difference between him and other aspirants is that, he was not just coming out to run because he wishes to, but that he is simply heeding to the clamour by the people of Isoko North for a political fresh air.

“They said that I should come out and run. They know my background, they know what I can do and they made the call and I yielded to the call.” He stressed.