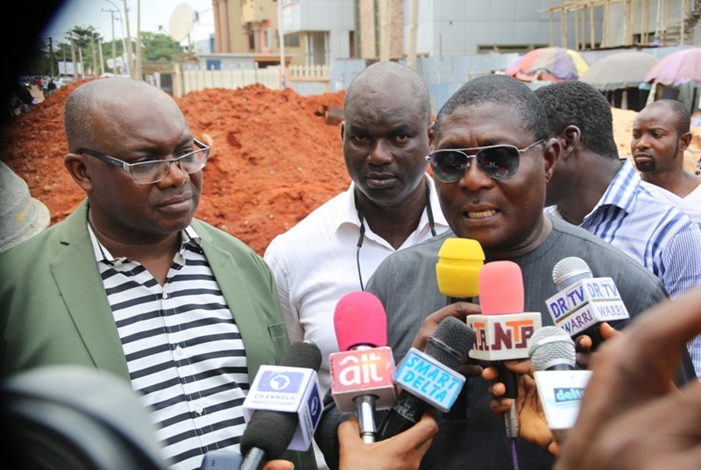 Delta State Commissioner for Works, Chief James Augoye (right), flanked by Engr. Joshua Egube (left), Director of Highways, Ministry of Works, during the Commissioner’s inspection of the ongoing drainage work at the Inter Bau Round about in Asaba

All ongoing road cuttings in Asaba and Okpanam areas in the Delta State capital territory are to be completed before the commencement of the African Senior Athletics Championship billed to be held inside the Stephen Keshi Stadium in Asaba.

The Delta State Commissioner for Works, Chief James Augoye, gave the assurance on Wednesday, July 18, 2018 while responding to questions at a special press briefing in Asaba to address the challenges of flood in the state.

Chief Augoye said the contractors handling the various drain projects were using ring culverts and special cement that would make it unnecessary for the 21-day period to elapse before usage.

The Commissioner assured that Asaba would undergo special cleansing before the commencement of the 5-day Championship holding from August 1 to 5, 2018.

He allayed fears that the ongoing construction of roads and drains would affect the championship, saying construction works were a continuous exercise that would not stop, adding that the approach to achieving result was key, noting that the state government had factored in such consideration.

Chief Augoye assured that palliative work will be carried out on Jesus Saves Road to make it motorable so as to serve as an alternative route for motorists who will not be able to pass through some parts of Nnebisi Road during the competition.

Present during the briefing were the Commissioner for Information, Ogbuesi Patrick Ukah, represented by the Functioning Permanent Secretary in the ministry, Mr. Paul Osahor, and the Director-General of the Asaba Capital Territory Development Agency, Chief Clement Ofuani.