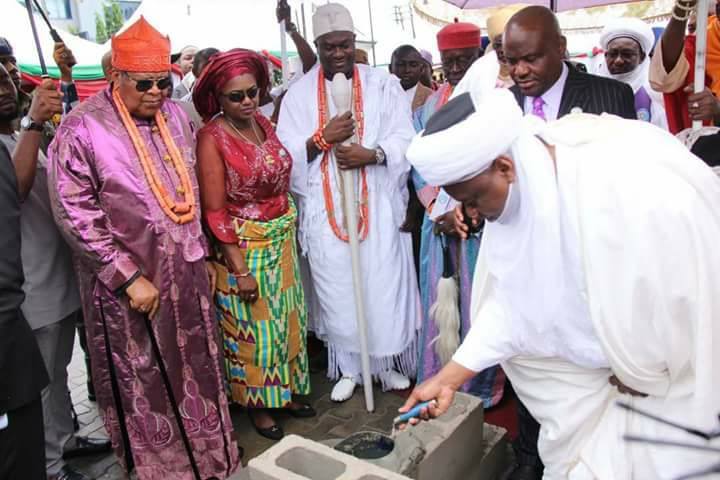 The Sultan of Sokoto, Alhaji Sa’ad Abubakar on Wednesday laid the foundation for the construction of the Rivers State Council of Traditional Rulers Complex.

Performing the exercise in Port Harcourt, Sultan Abubakar prayed God to grant Rivers State Governor, Nyesom Ezenwo Wike the strength to continue to deliver development projects to the people of the state.

He commended Governor Wike for his commitment to the completion of the ultra-modern traditional rulers complex within six months.

He described the ground breaking event as historic, pointing out the edifice will help the traditional rulers carry out their duties to the Rivers people.

In his address, Rivers State Governor, Nyesom Ezenwo Wike directed the Contractor and the Special Adviser on Special Projects to ensure the completion of the project, within six months.

He said that the contractor has been fully mobilised to deliver the project in record time. He said that his administration will not tolerate excuses.

He said: “Money will not be a problem in the completion of this project within the scheduled period.”

The governor explained that the State Government resolved to construct a befitting secretariat for the traditional rulers when it was discovered that the existing facility had degenerated to an embarrassing condition.

“We will give the Rivers State Council of Traditional Rulers a respectable and ultra-modern complex that all Rivers people will be proud of “, Governor Wike said.

Special Adviser on Special Projects to the Rivers State Governor, Mr Dum Wite assured the governor that the project will be completed on schedule and in line with approved specifications.

The ground breaking event was witnessed by the Ooni of Ife,Oba Adeyeye Enitan Ogunwusi, Amanyanabo of Nembe, King Edmund Dakouru, Rivers State Traditional Rulers and their counterparts from across the country.