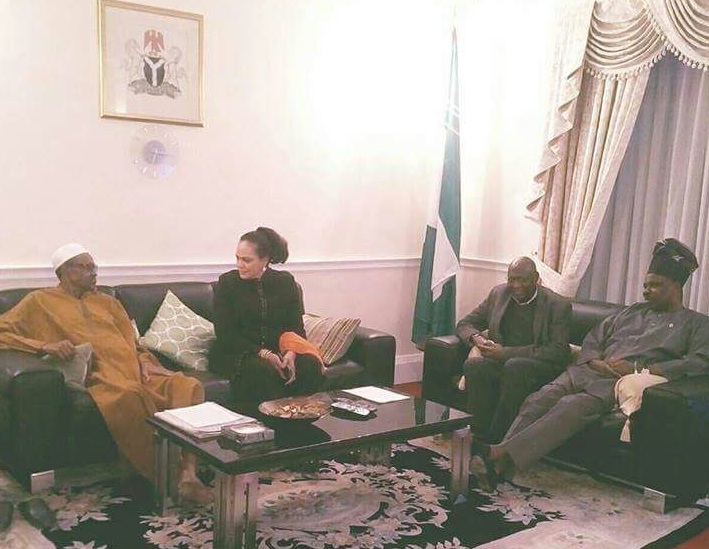 Photo of President Muhammadu Buhari alive in London has emerged contrary to malicious rumours by some Nigerians in the social media that he was either dead or ‘under intensive care’.

The photo was posted on Friday, January 27 evening by a Facebook user Aishat Alubankudi on her page after a meeting with Nigeria’s number one citizen.

She wrote a short statement to accompany the picture which also showed Ogun state governor Ibikunle Amosun, a close ally of the president’s, sitting relaxed in a chair across from the commander-in-chief.

Alubankudi is a Nigerian socialite and blogger based in the UK and a close ally of President Muhammadu Buhari.

She also posted a short comment to accompany the photo she released in which she asked for God’s forgiveness for all those saying the president had died.

The President is shown here with the Governor of Ogun State, Senator Ibikunle Amosun and some APC leaders in London.

Despite all attempts to debunk the rumours, the wicked mischief makers have continued to spread their falsehood about President Buhari.

Here he is, in fulfilment of their death wish ”under intensive care”.

The President, who left Nigeria on 19 January, is scheduled to return home on 6 February.