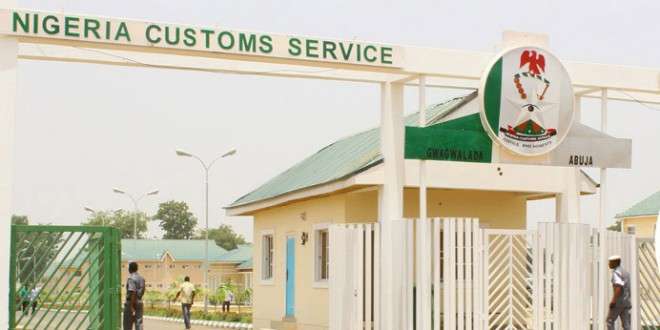 Nigeria Customs Service, on Friday said it had intercepted two helicopters and 23 consignments of accessories illegally imported into the country.

Mr Dan Ugo, a Deputy Comptroller-General of Customs, told newsmen in Lagos that the two helicopters and accessories, valued at N9.7 billion, were impounded at the Murtala Muhammad International Airport.

He said that the two helicopters and other accessories were seized because the importer could not provide End User Certificate from the office of the National Security Adviser (NSA).

Ugo said that the importer had contravened Section 36 (2) of Customs and Excise Management Act (CEMA), Law of the Federal Republic of Nigeria, 2004.

The Seized Helicopter by Nigeria Customs

“This equipment was seized because the importer contravened the Customs Act.

“The Comptroller General of Customs, Retired Col. Hameed Ali, in appreciation of the roles of Air Force has directed that the equipment should be handed over to the Nigerian Air Force.

“When we make seizures, we go through legal process by approaching the court of competent jurisdiction to file for condemnation and forfeiture to the Federal Government of Nigeria, which had been done.

“This falls within the purview of the Nigerian Air Force which will put it to use maximally to protect us as a nation,’’ Ugo said.

He called for continuous synergy between the customs and other government agencies for the safety and security of the nation.

Ugo commended the customs officers who made the seizure and assured them of continued moral support from the customs service.

Eze commended the Customs for a job well-done.

“The handing over of these helicopters by Nigerian Customs would go a long way to assist the force,’’ he said.

Eze said that the actual physical examination of the consignment would be done at Nigerian Air Force Base.